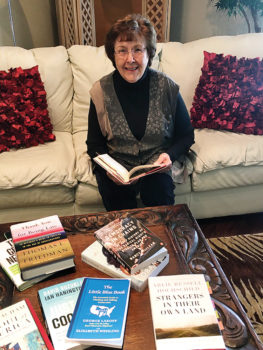 Voices United, a progressive women’s group, was founded at Robson Ranch following the Women’s March in 2017. The group has a lively monthly lunch at the Robson Ranch Clubhouse that draws about 60-70 people, but the group also provides more intimate sessions where members can share personal experiences and information about what’s going on in the world.

VU member Joan Wall, who has lived at Robson since 2004, organizes VU’s two discussion groups. The groups, which draw six to ten members for each discussion, meet monthly at member’s homes—one on Saturday afternoons and the other on Thursday evenings.

Members select books or videos to watch and discuss. “In the three years the groups have gathered, some of the most popular works discussed have been The Little Blue Book by George Lakoff, Democracy in Chains by Nancy McLean, and Thank You for Being Late by Tom Friedman,” said Joan Wall, discussion group organizer. “We read books or watch videos on current events,” she said, “which can be about education, economics, politics, or patterns of social behavior.”

Members also bring up their personal experiences to put the readings into perspective. “Our members have really interesting backgrounds in education, journalism, science, and health care,” she said.

Margo Ways, a retired geologist, has been a discussion group member for a couple of years. “I love it because it’s a small group where you can get to know people well,” said Ways, who has lived at Robson for about three and a half years. “You can also dig into topics of interest and learn things. We bring books, newspaper articles, and members sometimes make presentations. I really like to learn things.”

Wall’s background is not what you might expect for someone who closely follows social and economic trends today. She grew up in Louisiana and studied vocal music at Louisiana State University. She won the Metropolitan Opera’s National Competition, which took her to New York to sing as leading mezzo-soprano at New York’s Metropolitan Opera Company and in Europe for ten years. A decision to teach others to sing brought her to Texas Woman’s University where she continued to perform, teach voice and opera, write seven vocal textbooks, and develop a graduate program in vocal pedagogy, teaching others to teach vocal music.”