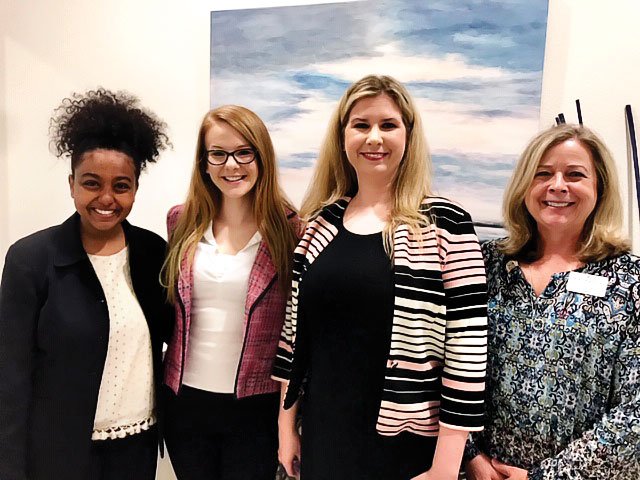 Voices United, a non-partisan group of progressive Robson Ranch women, meet monthly on the first Saturday of each month. Although we usually gather for our meeting and lunch at the RR Clubhouse, for our April meeting, we met at the home of Patti Kelly. Members brought many delightful appetizers and desserts for our brunch.

One of the groups that Voices United works with and supports is Ignite, a bipartisan organization which empowers young women to build political ambition. Ignite began in one high school and now serves over 5,000 young women nationally. Through the help of Ignite, young women learn leadership development, public policy, activism and civic engagement.

Robson’s Voices United has had several fundraisers to provide scholarships to young women from Denton. Whitney Thomas, National Development Director for Ignite, attended our April meeting. She also brought with her two students from the UNT chapter of Ignite. After discussing the goals for the organization, Whitney and students, Evan O’Dwyer and Yolian Ogbu, answered many questions from our members. The students said they have learned so many skills from being in Ignite – how to discuss issues, create policy, fundraise and build a base of supporters. Even if they decide not to run for office, these skills developed are so important in life. Yolian shared that she now understands that young women do not have to wait to become lawyers, etc. before running for office. Evan explained that as soon as she graduates, she plans to run for city council in her home city. Members were very impressed with Whitney and the young women and the answers they gave to the many diverse questions.

After this discussion, Tracy Olson, president, called for the various committee reports. The Community Outreach Committee announced that Interfaith Ministry would be our guest speaker at the May meeting. They will let us know more about the needs of Denton residents and to see if there should be another Robson Ranch fan drive as Voices United directed last year. The committee also announced that our next Ignite fundraiser would be in August or September and that we will be working on a project with Meals on Wheels toward the end of the year.

The Public Relations committee reported that at their last meeting each committee member was assigned a different month to write about the activities of Voices United and to submit articles to the Pioneer Press. Other ways of enhancing communication such as using emails and Facebook were discussed.

The Social Committee announced several activities that would be a part of our monthly meeting and others that would be separate parties. Plans are being made for a Christmas in July party and a Halloween party with charades.

The Caring Committee reminded us to call if we needed help or to send the name of a member that might have special needs. Committee members are ready to assist members by preparing food, providing rides, picking up medications, etc. Handmade cards will also be sent to those in need.

The Discussion Group Committee announced several books such as Andrew McCabe’s The Threat that are being read and discussed in their small groups.

The Political Committee provided postcards and address labels so we could easily contact our legislators on important bills before the Texas Legislature.

After the committee reports, Tracy Olson adjourned the meeting. If you would like to find out more information about this bipartisan, active group of progressive women who are making a difference in our community, please contact Tracy at [email protected]