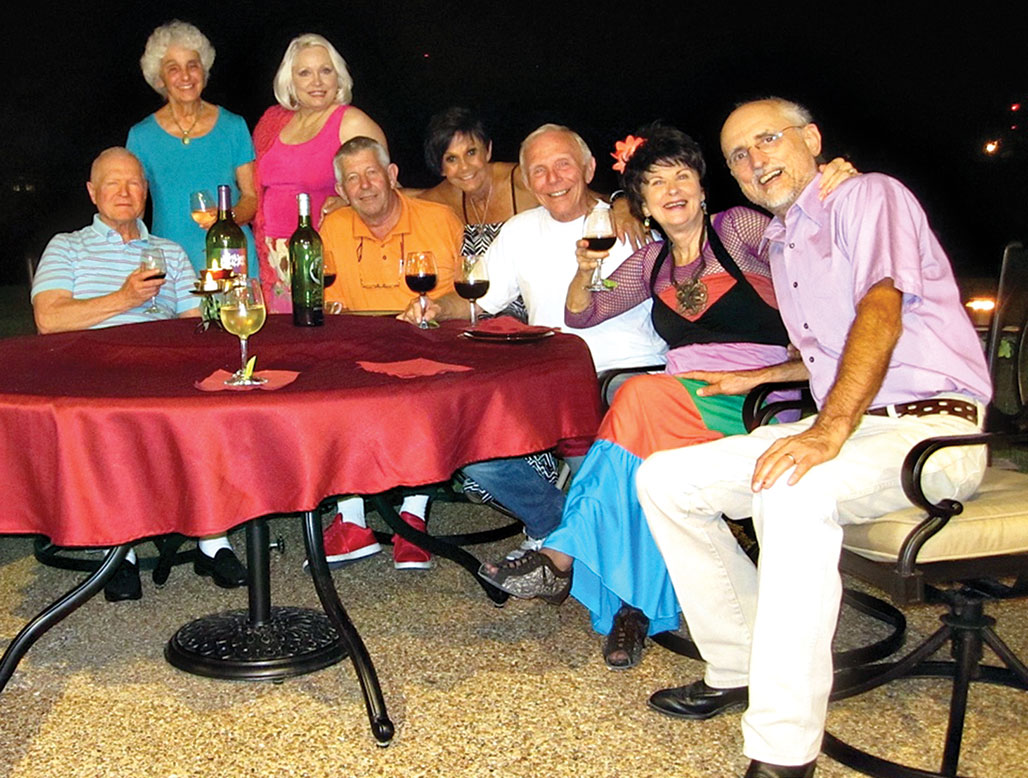 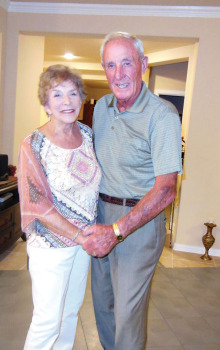 Eileen Whittaker and Jim Fox take a turn on the dance floor.

The Wine Stewards enjoyed an evening of wine, food and dance as they celebrated National Hispanic Heritage Month at the home of Pete and Nancy Toppan. Americans and Canadians observe this month-long celebration from September 15 to October 15. September 15 was chosen as the start date because it is the anniversary of independence for five countries: Costa Rica, El Salvador, Guatemala, Honduras and Nicaragua. The histories, cultures and contributions of American citizens whose ancestors came from Spain, Mexico, the Caribbean and Central and South America are featured and enjoyed.

Nancy and Pete greeted the Wine Stewards with glasses of red and white sangria. Sangria is served throughout Spain and Portugal during summer and in the southern and eastern parts of the countries year-round. It is most typically served at informal social gatherings, much like punch, from a punchbowl. It consists of wine, chopped fruit and a small amount of added brandy. Fortified with chilled sangria, the Wine Stewards feasted on an assortment of tapas and bowls of paella. Tapas are a wide variety of appetizers in Spanish cuisine that originated in the Andalusian region. The serving of tapas is designed to encourage conversation because people are not so focused upon eating an entire meal that is set before them. Also, since dinner in Spain is usually served between 9:00 and 11:00 p.m., tapas fill the void between work and dinner. Paella originated in the Valencia region of Spain and is one of the world’s most famous rice dishes. Agricultural workers would gather midday, combine leftovers with rice and cook in a large pan over an open fire. Today the dish contains chicken, seafood and the spice saffron. Complementing the food offerings were the red and white wines of Spain. Spain has more vineyards than any other country, yet places third behind Italy and France in volume of wine produced. The Rioja region is the “sweetheart” region of Spanish red wines. It produces the majority of its acclaimed red wines from the tenpranillo grape in addition to growing and utilizing garnacha. The Rias Baixas is in the Galician region. It is known and loved for its rich source of Albarino grapes that produce engaging and refreshing white wines. The U.S. is currently the leading importer of Spain’s Rias Baixas Albarino wines.

As the evening waned, Nancy and Pete performed a cha cha, a dance of Cuban origin, for their guests. Members joined in the dance. This rich and cultural evening ended with a lingering glass of wine on a darkened patio under a starry sky.