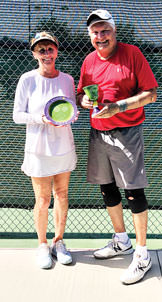 A wonderful tradition of tennis is continuing at Robson Ranch with the sixth annual “Breakfast at Wimbledon” tennis tournament. The event consisted of fun, but competitive tennis play followed by the Robson Ranch “take” on the ubiquitous strawberries and cream that is served at The All England Club each July.

Good sportsmanship and fun were the order of the day as Tennis Club members took to the courts of Robson Ranch to play their sets in a rotation assuring variety and challenge. Serving as tournament director, Eddie Salvo directed the players in the order of play while his lovely wife, Janet, kept up with sign-ins and scoring. At the end of the morning, two players emerged victorious! Tom Ehinger won the men’s trophy and Jayne Gornik won the women’s trophy. The club’s version of the Wimbledon trophy is a trophy with the winner’s name in calligraphy that is kept in their care for the ensuing year!

Robson Ranch’s Tennis Club put their spin on the traditional strawberries and cream, serving players and their guests strawberry shortcakes with whipped cream! It was an iconic American version perfect for summer.

The next Tennis Club event will be our Octoberfest, which is tentatively scheduled for October 5, 2019! This, too, is a tradition at Robson Ranch and is always a great celebration. More information will be forthcoming!

Come join the fun with the Tennis Club!

Dues to join the club are $10 per year and can be placed in our mailbox inside the side door of the Cimarron Sports Club. Please include your contact information so that our treasurer can send you an invitation to join via Groupworks.