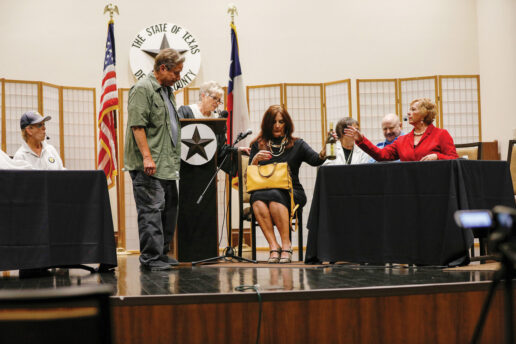 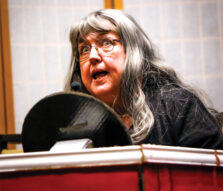 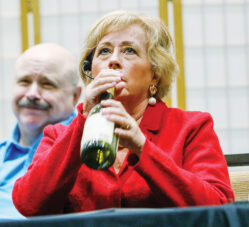 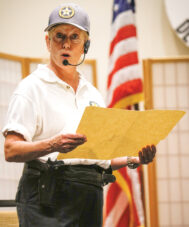 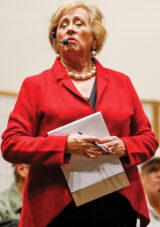 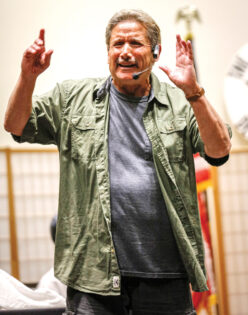 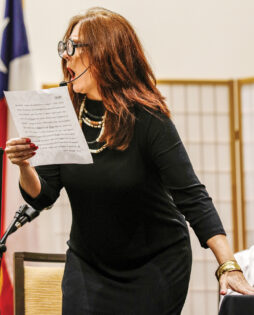 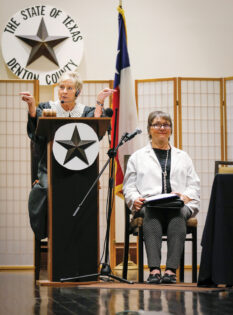 On June 5 and 6, after a long COVID-19 delay, the Robson Ranch Drama Club performed three one-act comedies. Originally scheduled for March 15, 2020, with one play adjustment and several cast and crew member changes; over 300 friends and neighbors in the Robson Community had fun laughing and being entertained.

The Speeding Ticket depicted how far one might go in order to avoid a speeding ticket. Mary Stimek played Starlight Moon, Doug Akins was the confused Officer Murphy, and Captain Ellen, played by Darla Mahan, tried to make sense of it all. Mary Ornberg directed the play.

Directed by Doug Akins, Etta and Ida at Starbucks is a scenario we can all relate to when Etta, played by Kathy Brasch, and Ida, played by Fran Hackley, two feisty friends enter a Starbucks for the first time. How to order? What to order? And the prices! Mary Fabian played the part of the spirited barista, along with several customers.

Lawyer, Lawyer was the story of a murderess floozy (played by Kathy Jacobs), prosecuted by a public works employee (played by Tony Kura), who had a preoccupation with his cell phone. The murderess admits she killed her husband with a butter knife, which makes her inept lawyer’s job more difficult (played by Vicki Parr). Lucille Zimmerman played the part of Judge Judy Moody, Teresa Blackburn-Korn played the bailiff, and Shirley Waterhouse and Doug Akins played key witnesses, Dr. Payne and Officer Murphy. Doug Akins directed Lawyer Lawyer.

The performances were made possible by the Art Age Senior Theatre Resource Center. A special thanks to Shelbi Berg, her staff, and the HOA for providing much of the staging and props.

The purpose of the Robson Ranch Drama Club is to encourage the production of plays, provide members with skills and experiences, deliver entertainment to the community and attend performances or workshops. Mary Ornberg is the president and Doug Akins is the vice-president for 2021.

Drama Club meetings are held every second Thursday in the clubhouse. Any interested resident is welcome to attend a meeting or reach out to [email protected]