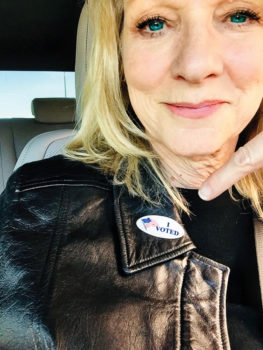 A deputized voter registrar, Bonnie Moore, shared the ins and outs of voter registration with members of Voices United at the club’s June meeting. To be a deputized registrar, she noted, one must attend training and pass a test; the position is non-partisan, and registrars cannot refuse to register any eligible voter. They must provide the voter with a receipt containing their Deputy ID number, which they must also include on registration forms they submit to the state. However, anyone can obtain up to 100 voter registration forms to distribute and can help people fill them out. For one or more forms, contact 940-349-3200, [email protected], or the Denton County Elections Office, 701 Kimberly Dr., Denton.

If new Robson Ranch residents moved here from within Denton County, and were registered to vote at their previous residence, they just need to fill out a change-of-address form, which they can do online. However, if they moved from a different Texas county or from another state, they must re-register to vote.

All United States citizens who are at least 17 years and 10 months old can register, but the person must be 18 at the time of voting. Also, one must have applied for a voter registration card a minimum of 30 days before the election. Homeless citizens are eligible to vote, but they do need a mailing address; if their voter registration card is returned by the Post Office as non-deliverable, the person will be taken off the rolls. College students are eligible if they have been Texas residents for at least 30 days.

Originally from Buffalo, N.Y., Bonnie moved to Texas in 1980. She is a resident of Trophy Club and co-owner of M2 Metals, the leading iron door company in the Dallas-Fort Worth area. She served on the communication team for President Obama in 2008 and 2012. She volunteered with the ACLU after the 2016 election and then became a voter registrar in Denton, Tarrant, Dallas, Collin, and Wise counties. Her focus for the last three years has been educating and registering high school and college students to vote. She is passionate about the importance of voting and the rewards of assisting at polling locations.

Adding to Bonnie’s busy life is her mask-making. Recognizing the importance of face masks during the pandemic, she has made more than 200 high-quality masks that she’s mailed to people in New York City; Washington, DC; and Chicago, as well as in New Jersey, Connecticut, Texas, and even Mexico. She does not charge for masks, but does ask recipients to make a donation to an area charity.

Voices United is a women’s group that meets once a month; some meetings feature guest speakers such as Bonnie, others focus on concerns of members and on committee work, including fundraisers for Wheels on Wheels and Ignite. Anyone interested in participating in Voices United can contact Tracy Olsen at [email protected]