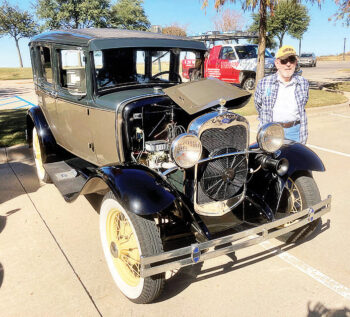 Grover Graham with his Model A Ford

When it comes to car names, the Model A Ford is an iconic brand that comes to mind for many of us. And to Grover Graham, it’s a brand he is familiar with since his teenage years.

The Model A Ford was first produced on Oct. 20, 1927, and it replaced the venerable Model T. By March 1930, Model A sales hit three million, and there were nine body styles available. Model A production ended in March 1931.

Grover’s Model A is a 1930 Murray Body Fordor painted in Chicle Drab and Copra Drab with straw colored wheels. He bought it 15 years ago from the previous owner in Pasadena, Texas. After removing all the body parts, Grover cleaned and soda blasted the rust-free body and frame, replaced some wood pieces, and had the body professionally painted. He also had its Ford replacement engine rebuilt to “touring” specs, and it runs better than new. The Model A was one of the first cars Grover tinkered with as a teenager, and it is still one of his favorite cars.

Grover and his wife Annie moved to Robson Ranch in August 2010. They brought the Model A along with a red 1961 Corvette, and a white 1962 Oldsmobile Starfire hardtop. The Corvette is an unrestored, numbers matching car with a 283/270 engine and 4-speed manual transmission. In 2013, this car achieved high Second Flight NCRS (National Corvette Restorer Society) status and Grover has owned it for 46 years. The Starfire was designed as a personal luxury car. Its standard equipment included bucket seats, center console, tachometer, floor shifter (first for a U.S. full-sized production car,) power steering, brakes, windows, and driver’s seat, along with the Starfire 394 V8 engine. But this wasn’t his first Oldsmobile.

His passion for muscle cars began with a 1950 Oldsmobile 88 that he bought in high school from a friend. This first generation Olds 88 (1949-1953) was a hugely important car, with one of the first postwar overhead valve V-8 designs, the famous “Rocket” V-8. A powerful V-8, combined with a relatively light body, was a formula that later blossomed into the muscle car.

You can see and hear more about all our cars at the Rollin’ Ranchers next event. Watch for our schedule in the HOA email for outdoor events and monthly meetings. The Car Club goal is to participate in car-related events or trips each month. Club members are kept informed of activities and events through GroupWorks and dues are $10 per year. For more information, email Paul Wawak at [email protected]