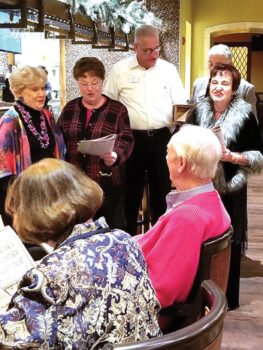 On Monday, Dec. 20, the Robson Ranch Catholic Club hosted its annual Christmas Celebration Dinner. The one difference this year was that the dinner was not a potluck held at St. Mark’s Parish Hall, but was a dinner held at the Robson Ranch Grill. The celebration began with an hour to mix and mingle with fellow members and also with non-member guests. The bartenders Zach and Hudson were kept busy, and they did a wonderful job filling everyone’s requests. When dinner was almost ready to be served, President Irene Manning greeted everyone, thanking them for coming, and then introduced Deacon Jim Galbraith to say a few words and to lead the group in saying Grace.

The Grill staff outdid themselves in preparing an absolutely wonderful meal of chicken piccata with angel hair pasta, Caesar salad, and delicious garlic knots. Dinner was followed by an assortment of red and green decorated Christmas cupcakes. After dinner and dessert, Susan Galbraith led the group in a singalong of favorite Christmas carols. Susan asked for some of the Robson Choir members to join in, and Rosie Rouse was the first to join in, and Irene Manning quickly followed. As everyone became more relaxed and in the mood, Brett Paxton and Jack Kearney, members of St. Mark Choir, also joined in. To say that a wonderful time was had by all is certainly an understatement.

The Robson Ranch Catholic Club’s next meeting will be on Tuesday, Jan. 9, in the CATC at 7 p.m. The club meets on the second Tuesday of each month from September to May. Currently, all meetings are held at 7 p.m. in the Bluebonnet Room at the CATC. Everyone is welcome, so please come and see what we are all about.