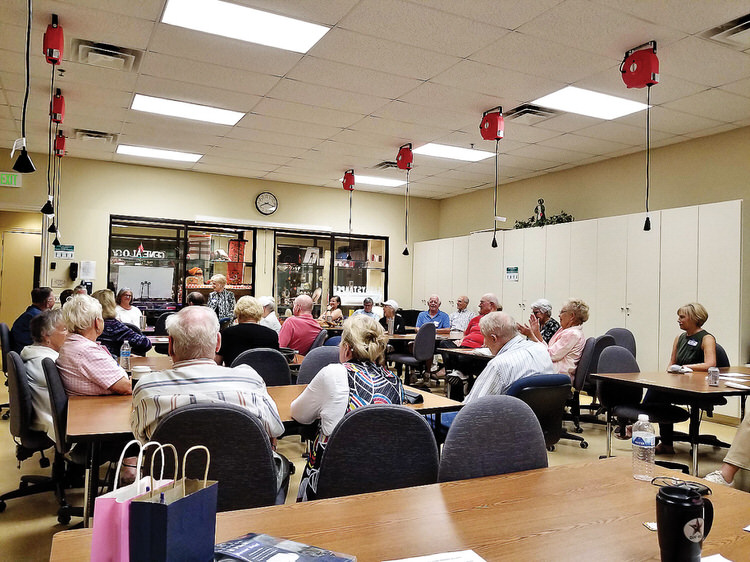 The first meeting of the Robson Ranch Catholic Club since COVID-19 hit in March of 2020 was a huge success. The meeting was the first held at the CATC, and there were many familiar faces and some new friends as well.

The meeting was opened with prayer led by President Irene Manning. Anyone new in attendance got to tell the group where they moved from and how long they have lived at Robson. Then the meeting was turned over to Marge Lane who gave an incredible account of what the club has accomplished since its inception back in 2006. Since Marge has been a member since the very beginning her knowledge of all the club’s workings and accomplishments was so inspiring, making everyone eager to continue making a difference through good works in our community. Marge spoke of how, in the past, the club has donated gallon size bags of essentials to the homeless through Our Daily Bread each Christmas and how last year due to COVID-19 restrictions, the club was unable to make the usual donations. However, instead the club collected monetary donations and gave a check for $2,600. Marge also informed the group that this year we are changing things up once again. Our Daily Bread and Monsignor King Outreach are combining and are in need of underwear, socks, hats, gloves, scarves for both men and women, as well as little gift bags containing pads, pens, lip balm, tissues, and an inspirational card. These items will need to be brought to our meeting on Oct. 12 or at the very latest our meeting on Nov. 9. Marge also spoke about the two Rosary groups which meet weekly at member homes and Deacon Jim Galbriath spoke about the Men’s group which meets at the Grill on the 1st and 3rd Thursday of each month. Deacon Jim also spoke of ministries he has been involved with in the past and his ministries which he is part of through St. Mark.

The floor was then given to Pat Langa who spoke of the SOT Auction which will be held on Veterans Day, Nov. 11. A jar was passed around for anyone wishing to contribute to the club’s donation to the auction.

Please be sure to mark your December calendars for our Christmas gathering, which will be held in the lounge at the Grill on Dec. 20. Details to follow.

The meeting ended with a fun game of “Do you Remember.” It was a great way to find out things about the club’s members that you would never have known otherwise.