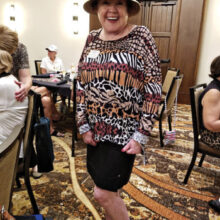 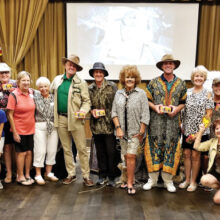 Winning teams of the Jungle Animal Games with Gayle, one of the judges 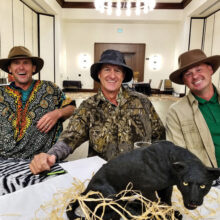 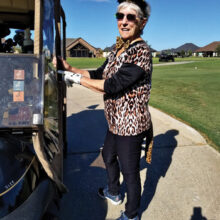 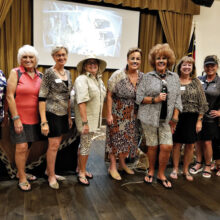 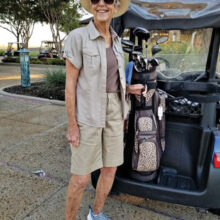 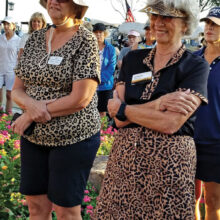 The West course was full of monkeys and other wild animals (ladies) as 62 members of the WLN took the course for a fun time of wild scramble play. All members were encouraged to dress in animal print, safari, jungle or camouflage garb. A little monkey, sitting atop a small box of scrolls awaited the players at every tee box. Each scroll gave instructions on how to play the hole. The challenges included crazy shots such as: hit the bunker in front of the green then toss the ball onto the green; play a hole using only a 3 wood even for putting; hit the monkey sitting on the picnic cloth for a free shot over the ‘gunk’; putting with your foot; and other wild and crazy shot options. The team of Jan Norton, Jan Lands, Fran Norris, Susan Hebert, and Kathy Brasch came up with the fun scroll ideas and they did an excellent job!

The players worked up a nice appetite and thirst after golfing in the ‘jungle’ and then headed to the clubhouse for drinks from the bar and a nice luncheon. After a brief WLN quarterly meeting and lunch, the real fun began. Each table was given another scroll with the name of a jungle animal and a golf term. The challenge was to come up with a song, skit, or story that incorporated both and was worthy enough to gain votes from the visiting judges—Craig Pullen, Tyler Clark, and Rhett Hubbard. There were some really wild goings on from the contestants. There was singing, screaming, all kinds of animal noises, and a lot of rolling around on the floor. Staying true to the theme, a wild time was had by all!

Additionally, there were several donated door prizes. Many of the prizes were made by Robson residents such as paintings, pottery, and handbags. The social committee once again raised the bar for good time gatherings.

Though the day was all about fun, there was a more serious side to the event. WLN raised funds for the charity of the quarter, She Supply. She Supply is a female organization with a focus on empowering women by providing the most basic female necessities to women in the North Texas area. They provide under garments and personal hygiene items to community partners, such as homeless shelters, food pantries, and domestic violence services, on an ongoing basis. Their mission is to provide a sense of decency and cleanliness to women in less fortunate circumstances. WLN members were very generous in their donations and support for this organization. We were excited to present a check in the amount of $1,000 to She Supply!