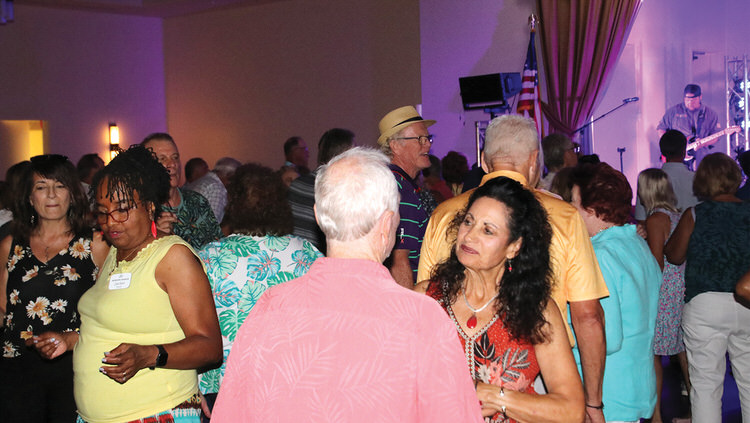 The Robson Ranch Classic Rock Club strives to bring great music for listening and dance to our audiences. We have had spot on tribute bands, but also enjoy groups that just get you on your feet, dancing and singing, and moving your body. On July 30, we think we hit the mark!

Live 80—The Ultimate 80s Experience came to the Ranch for a change-of-pace Friday night dance party. They bill themselves as Dallas’ Premier ’80s Show, playing favorites from new wave to pop to dance to hair metal and everything in between. The music is a great mix of 80s songs broken into non-stop blocks. The result is similar to a DJ spinning with no breaks in between songs so that the fun doesn’t stop.

The band led off with Prince, Cyndi Lauper, and Michael Jackson chart toppers (“1999,” “Girls Just Wanna Have Fun,” “Beat It”): three iconic classics that defined their era and are known to most everyone. How poignant to have this on the week of the unveiling of Prince’s previously unreleased studio album, Welcome 2 America. The rocking was virtually non-stop from the opening chord of “1999” to the closing notes of Queen’s “Bohemian Rhapsody.” The sold-out crowd obviously came ready to party and did just that. The dance floor was packed from the very first song and stayed that way for over two hours. It was definitely a Robson Ranch Classic Rock Club party!

Just a sampling of the set list included “Sweet Child of Mine” (Guns n’ Roses), “Don’t You Want Me” (Human League), “Don’t Stop Believing” (Journey), “Centerfold” (J. Geils Band), “You Shook Me All Night Long” (AC/DC), “99 Red Balloons” (Nena), and “Hit Me With Your Best Shot” (Pat Benatar). Throw in some Madonna, Billy Idol, Romantics, ZZ Top, and Go-Gos, and you can see how they incited the crowd in non-stop dancing and singing. An added bonus was the impressive multimedia production with a computer controlled light show synchronized to the band’s performance. A wonderful time was had by all. Thanks again to everyone from the club, the HOA, the band, and production crew for a blast!

Sadly, we must pay homage to two more rock greats who recently left us: Don Everly and Charlie Watts. The rock and roll heaven band grows. RIP gentlemen. Our time is so precious!

Next on the schedule is the return of the great Foreigner tribute band Double Vision. We have another sold-out crowd and we will let you know about it in next month’s Pioneer Press.

Stay current with club happenings, events, and information about future concerts and shows by following us and liking us on the Robson Ranch Classic Rock Club Facebook page: www.facebook.com/groups/361485941133904. Contact us and get on the mailing list at [email protected]

In the meantime, Keep on Rockin’.