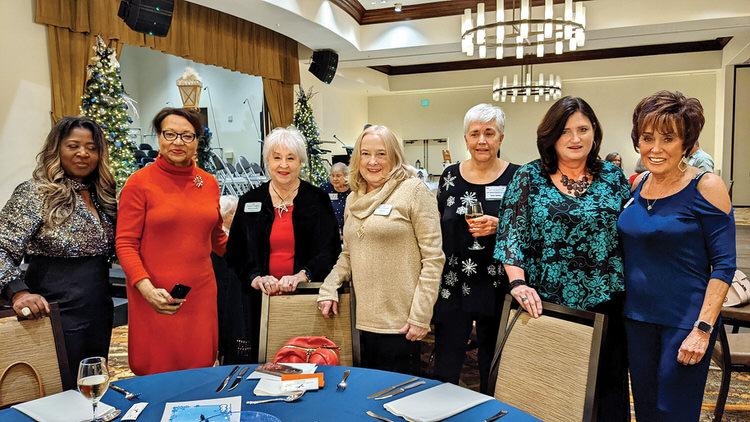 There’s just something special about this time of year. The twinkling lights, the festive mood, and the neighborhood parties. There’s also a renewed energy and optimism about going into the new year. The RR Democratic Club’s annual holiday party was a time to recognize our achievements and define what it means for Democrats moving forward.

Helping chart a path for the club’s future, guest speaker Delia Parker-Mims, Denton County Democratic Party Chair, outlined the goals of the Democratic Party in 2022. At the top of that list is the “Fight Back Register 50” program to register increased numbers of democratic voters in advance of the midterm elections.

We also took time to reflect on the highlights and accomplishments of the past year. The volunteer efforts of club members were praised for their tireless work on local, municipal, and state elections by block walking, manning phone banks to get-out-the-vote, hosting candidate forums, and serving as poll workers. Monthly meetings included presentations by Police Chief Frank Dixon, Mayor Gerard Hudspeth, Councilman/Mayor Pro Tem Jesse Davis, and the “Denton Together” organization. Additionally, the club had a notable presence at the Ranch, through its active participation in the 4th of July parade and the Adopt-A-Road/Keep Denton Beautiful program.

During the evening’s festivities, club officers were recognized; those returning on the board and those newly elected. Co-Presidents: Larry Lewis and Jane Scholz, Vice President: Lisa Olson, Secretary: Lavelle Carlson, and Treasurer: Stan Brein. Special acknowledgment was awarded to Kara Engstrom, our former Denton County Democratic Precinct Chair. Cheri Kennedy, RR resident, will now be serving in that role.

2022 will be an exciting year for the RR Democratic Club by providing a venue for fellow democrats, progressives, and independents to gather, socially connect, and become more politically engaged. We advocate for a strong Democratic presence at Robson Ranch by involving the community, supporting progressive candidates, and hosting a variety of speakers and community leaders to better inform and educate us on issues affecting our community, state, and country.

Our effectiveness is built on the involvement and support of our members. Come join the RR Democratic Club on the fourth Thursday of each month, at 7 p.m. in the clubhouse. For more information, contact [email protected]