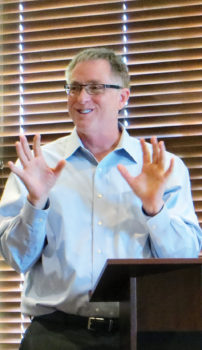 Mayor Chris Watts shares his “State of the City” report.

In his second term as mayor of the city of Denton, Chris Watts was the honored guest of the Robson Ranch Democratic Club at its June monthly meeting. He delivered insights into major capital projects of roads, business growth and social initiatives. Viewing Denton as a unique city with a wide range of demographics, extensive special city-wide events and two universities, he finds being mayor a rewarding position with many diverse ideas to navigate.

Mayor Watts reminded the audience that despite the tough economic times the city experienced in 2007, no city services were cut. But now with the new city manager, Todd Hileman, in place, along with other changes in the administrative offices, the mayor foresees the city emerging with even greater stability and new, fresh and energizing ideas. With a goal on maintaining or lowering the current tax rate, he and the counsel are striving to improve the city’s quality of life while focusing on its core services.

One of the greatest struggles faced by the mayor and council is the population growth seen in the North Texas corridor. To meet these increased and challenging demands on city services, infrastructures (roads, etc.) are in need of spending upwards of $11,000,000 annually. Current and/or projected road projects include Corinth to Highway 380, Brinker Road and Mayhill intersection, and expansion of the Highway 288 underpass. The city is committed to economic growth as is evidenced by the development of Razor Ranch and the expansion of University Drive from Bonnie Brae to Interstate 35E.

On the environmental front, Mayor Watts addressed questions regarding Denton’s air quality. Scientific studies set 60 ppb of ground ozone as “safe to breathe.” Unfortunately without any signs of declining, the city’s three-year average is 78 ppb of ground ozone with some days as high as 81 ppb. The mayor could not make a commitment to the Mayors National Climate Action Agreement pending further review the details and terms.

Questioned about the challenges faced by the city as a result of unfunded mandates from the state legislature, he expressed his frustration with such legislation and the state infringement on cities’ controls.

As to social issues, Mayor Watts expressed his empathy for the homeless population within the city. Being displaced and living out of a car as a 12-year old, he personally identifies with their specific needs.

Mayor Watts applauded the contributions and generosity of Robson Ranch residents with their time and energies given to the Denton community, area non-profits and schools. He was hopeful that through the continued volunteerism of Robson residents the city as a whole would more fully recognize the important role our community plays in shaping a better Denton.

If you’re Interested in taking a more active role in your community and learning more about the city of Denton through insightful speakers, then visit the RR Democratic Club on the third Thursday of each month at 7:00 p.m. in the Clubhouse. For more information visit the website at www.rrdemocratclub.com.