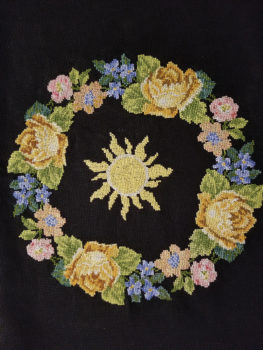 The 2019-20 theme for the American Heritage Awards for the Daughters of the American Revolutions (DAR) was “Rise, and Shine Your Light on the 19th Amendment.” The goal of the American Heritage Committee is to preserve the American heritage in the fields of art and sculpture, crafts, fiber arts, literature, drama, and music. Entries into the competition must incorporate the theme within their piece, as well as submitting a paragraph or more on how the work reflects the theme.

I took the opportunity to enter a submission. The entry required an original piece plus an essay. Below offers you a part of my essay. I won first place in the cross-stitch category for the state, much to my surprise.

The Sun Shines on the Yellow Rose

“As a young child, I spent most of my time in the summer at the 500-acre farm of my maternal grandparents in eastern Ohio. As the youngest of three, I was often left in the house with my grandmother. She taught me how to play card games, complete jigsaw puzzles, cook, and cross-stitch. When we weren’t indoors, we were working in her vegetable and flower garden. I remember her yellow rose bush and asking her why she grew yellow ones, simply because I only remembered red ones. My grandmother said it was a ‘women’s flower.’

“It wasn’t until the DAR District II meeting in September 2019, that I realized my grandmother’s inner meaning. It was this meeting where I learned the relationship between a yellow rose and the 19th amendment. I also realized that now in retirement, I had the time to honor my grandmother’s thoughts by designing a cross-stitch sampler focused on the yellow rose.

My grandmother watched and read the letters sent home by her beloved during his time in Europe during World War I. They married in 1919, and had their only child, my mother, in 1920. “My grandmother was brought up in the U.S. when women did not have the right to vote. Her ‘lot’ in life was to be a mother and a wife. Although she taught grade school for just a few years, she wanted more for her only daughter. She allowed her to leave home to become a beautician in Cleveland. Grandmother loved her future son-in-law, a naval lieutenant who served in World War II.

“My early cross-stitch samplers consisted of an American flag, a map of the United States, and seasonal samplers especially focused on major holidays. My grandmother and I would sit and talk about many things I do not remember, but those that I do are the ones focused on family, traditions, and values. I realized I could take these memories and create a design of yellow roses that would best honor her, not just as a grandmother, but also my heritage as a third generation DAR member.”

I offer my personal thanks to my fellow Hooks & Needles group members at Robson for keeping me on-track to completion and to my neighbors who convinced me to submit this article.