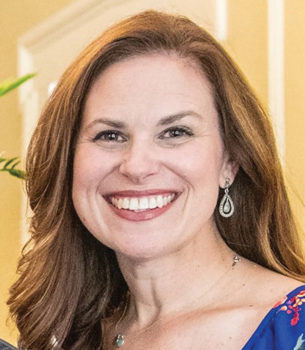 One of the best benefits of living in Robson Ranch is the variety of learning opportunities. One very active group here is Voices United (VU) that meets monthly to share information and raise money for local charities. There also are regular group discussion meetings.

Sometimes what we hear on the news is just snippets. Dixon, who teaches literature at the local branch of Texas A&M, filled in all the holes to show what is being done to combat deaths due to guns.

She began with a historical perspective. MDA began as a Facebook group, but after multiple shootings in the schools it grew. Then, MDA joined with other organizations, including Every Town for Gun Safety, Survivor Network, and Be SMART.

MDA now has chapters in all states and a bipartisan membership of more than six million, both women and men. The example given by Ms. Dixon was her family. Her husband and brother are both gun owners. She explained how they work within the organization to meet the goals of changing laws and attitudes on the issue.

The most effective method is teaching responsible gun ownership through the Be SMART program, which stands for:

* M: Modeling behavior: Kathy’s husband secures his gun in a safe. They talk to their children about gun safety.

* A: Asking about others unsecured guns in the house, for instance in neighbor’s homes where children gather to play.

* R: Recognizing the role of guns in suicides. It is important to remove guns from family members who are at risk of suicide. Gun suicides result in an 85% fatality rate while suicides attempted with drugs and other means result in a much lower fatality. Common-sense gun laws will decrease those fatalities significantly.

* T: Telling others: Work with PTAs, church groups, pediatricians and others.

The VU would like to thank Dixon for her compelling discussion on common-sense gun laws and her leadership.

Besides being a learning group, VU supports several local groups with fans for Denton county’s elderly who cannot afford air conditioning, and Meals-on-Wheels. This group also supports the national group Ignite, which works to increase the involvement of young women in government, by providing money for scholarships that go to young college women. VU also provides a venue for persons seeking office to educate the public on their platform.

If you are interested in being a part of these discussions and activities, contact Tracy Olson at [email protected]