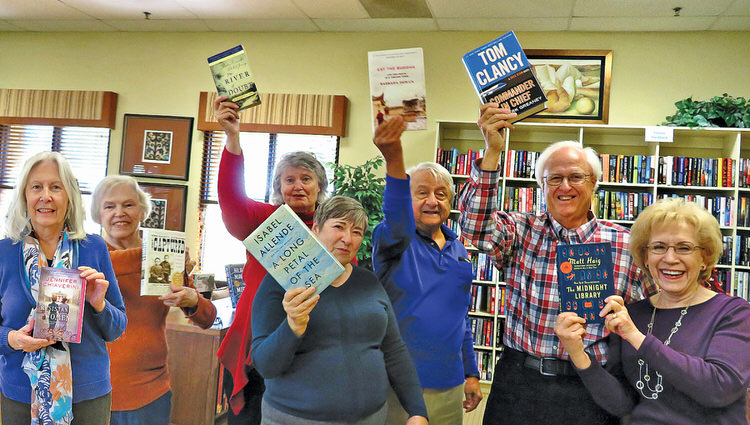 Members of the Library Board holding their favorite books, which can be found in our own Robson Library: (left to right) Joan Pursley, Sondra Clifton, Doris Koenig, Diane van Naerrsen, Fred van Naerrsen, Jerry Tarpley, and Nancy Tarpley

We can respect the choices our Library Board members make in the books they choose to read. After all, the board is made up of avid readers, many of whom are former librarians. They have dedicated their lives to books, and they continue to do so by working to support our own Robson Library. This month, we asked the members of the Library Board to share what they enjoyed reading this year or books they find especially meaningful. Following are the results of what they shared with us. As you will see, there is a mix of fiction and nonfiction, including a biography and a few historical pieces, as well as those based on history.

Marcia Elving favors The Count of Monte Cristo, by Alexander Dumas, and The Little Prince, by Antoine de Saint-Exupéry, as books that were meaningful to her. These are both fiction, the first being a literary classic, while the second is considered a children’s book but with adult-themed overtones.

Linda Bono gave us 84, Charing Cross Road, by Helene Hanff, a beautiful collection of letters, which becomes an epistolary memoir. Also from Linda, Anxious People, by Fredrik Backman, her favorite book from 2020 that she was lucky enough to read again for a December book club in 2021.

Joan Pursley recommended three books relating to World War II. The Paris Library, by Janet Skeslien Charles, while fiction, is based on an actual library which contains the largest collection of English language books in Continental Europe. It is filled with books sent to American servicemen during the war. Resistance Women, by Jennifer Chiaverini, is also based on a true and unforgettable story of ordinary people (one American and a group of Germans) who work together to bring down the Third Reich from within. While Paris Slept, by Ruth Druart, is the story of love and sacrifice that begins with a Jewish woman handing her baby to a French rail worker before she is taken to the concentration camps.

Doris Koenig presented a biographical narrative recommendation with The River of Doubt: Theodore Roosevelt’s Darkest Journey, by Candace Millard. Doris’ other two selections were the historical fiction The Personal Librarian, by Marie Benedict and Victoria Christopher Murray, and the British historical fiction The Shell Seekers, by Rosamunde Pilcher.

Fred van Naerrsen chose two historical pieces to recommend. The first is The Captured, by Scott Hesch, the story of a 10-year-old boy captured by Apaches in 1870. As van Naerrsen says, in this book, Hesch uses “a historian’s rigor and a novelist eye, (to) paint a vivid portrait of life on the Texas frontier, offering a rare account of captivity.” Fred’s second and our final entry is Eat the Buddha, by Barbara Demick. In it, this award-winning journalist explores one of the most hidden corners of the world. She chronicles the struggle between the Tibetans and the Chinese as Ngaba was to become an engine for the resistance for decades to come.