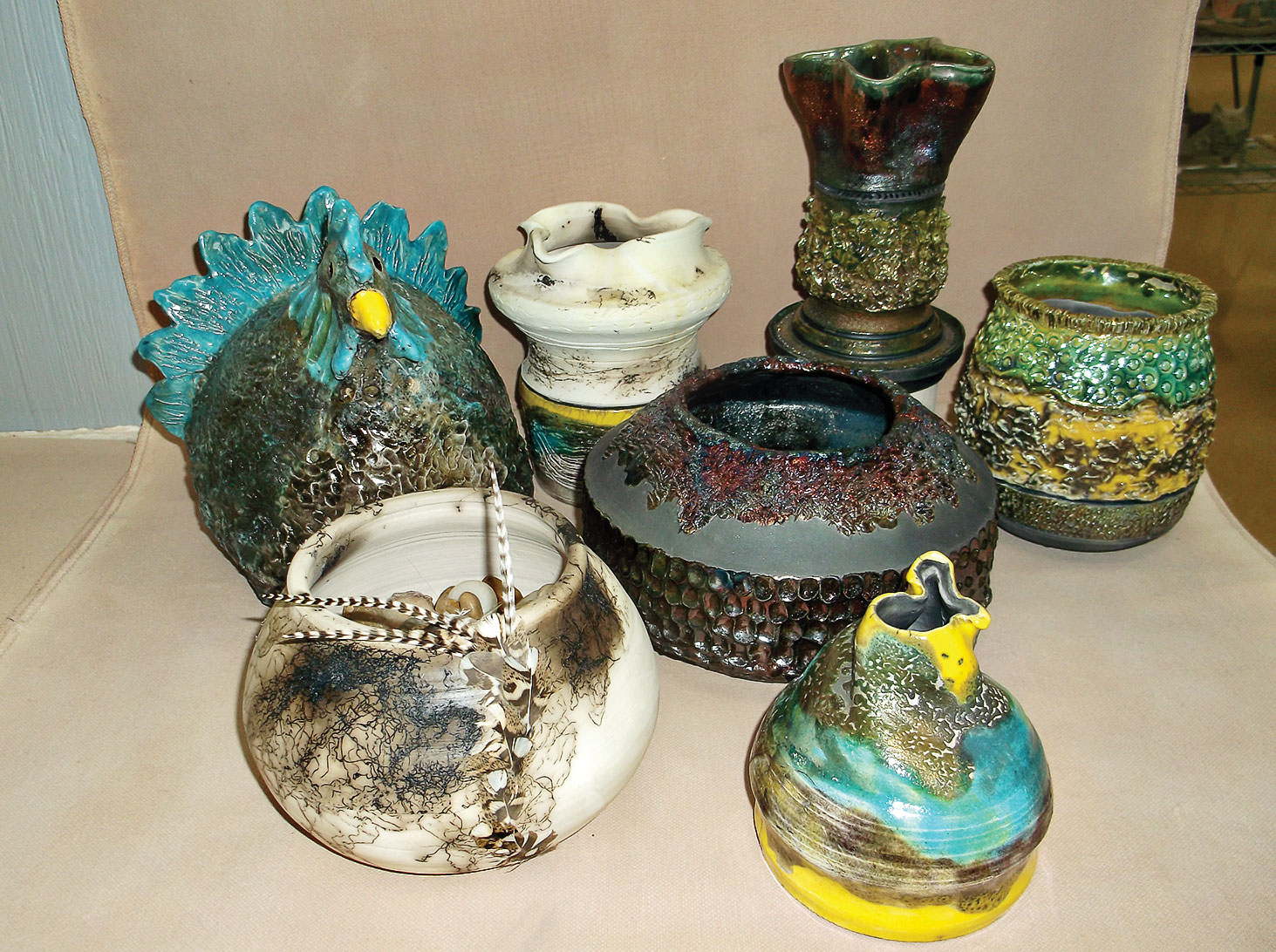 Because fire in a trashcan is involved in the Raku process, we are traveling down the road a piece to Farmers Branch, Texas where Connor Muldoon, established professional potter and instructor, will guide us along the way to success.

The word Raku means “happiness in the accident”. This technique was originally created for the Korean tea ceremony. In the 16th century in Japan, great ceramic masters such as Sen no Rikyu were able to give full scope to the art. Fast removal of the piece from the furnace or kiln and then covering it with flammable materials such as natural wood sawdust, inhibited the absorption of oxygen to the molten enamel, which then produced the characteristic cracking effect from the thermal shock. The added color change caused a metallic appearance. The process of Raku firing differs from other firing methods because pots are removed from the kiln at their maximum temperature.

Both smoke and fire create an unpredictable, unique style in the Raku kiln process. Clay pottery is bisque fired to cone 08 and then glazed and fired in a Raku kiln followed by color enhancement in a “reduction chamber” (trashcan with nest of straw, newspaper, shiny colored strips of paper and sawdust).

In regular pottery firing, the wares are cooled down slowly in the kiln and removed with gloves. Raku ware is removed immediately with tongs, in the traditional Japanese firing process, while it is still glowing red-orange from the heat.

“Raku clay” is more suited to the higher temperature and thermal shock of the Raku process, but it is possible to produce objects using any clay. Glazing can be done by spraying, brushing or sponging. Some Raku glazes produce cracking and spider web effects. Any low temperature glaze is appropriate for Raku.

Fire at 1800 F. and leave in kiln for around 30 minutes before placing in the reduction chamber (trashcan with nest and lid) for 15 to 90 minutes. The smoke in the nest of the trashcan causes changes in color and patterns of the Raku pottery. The fire consumes the oxygen within the can and it also draws the oxygen out of the raku pottery. The unpredictability of the process is essentially the result of the removal of oxygen in the reduction chamber.

The final step is to dunk the piece in cold water and then clean with a stiff brush or some abrasive material to remove ash. Raku pottery is mainly used for decoration rather than being functional.

Firing Raku pottery is an exciting adventure still holding on to the mystique, a unique process appealing to many potters today. We do have fun! Watch for our window display in May.