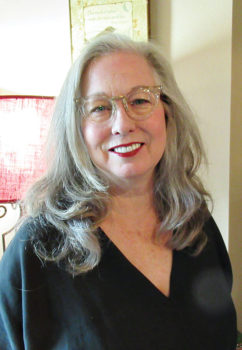 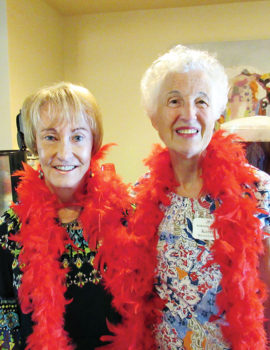 Hostesses for the Lunch Bunch; photography by Nancy Thomas

Festive—that’s the atmosphere that greeted New Life Church’s Lunch Bunch on September 9 as ladies were met at the door by hostess Karen Wesselmann and then by owner and hostess Renee Carlson. We enjoyed wonderful food, fun fellowship and Renee’s artwork, a colorful heifer, which evoked “Holy Cow! How cute is that!”

Our director, Jois Ross, introduced Pam Randall to share her work at the same prison in Bridgeport where Chaplain Philip Yoder serves. We were electrified by the powerful truths she exemplified as well as expounded!

Pam Randall, an interior designer, had worked through many life challenges by the grace of the Lord, to become a prepared tool through which God could work.

Her work began in the Women’s Unit of the Bridgeport Prison in an effort to prepare those who were soon to be released, to give “education and life-skill training to the treasure of men and women behind prison walls,” through the goal of “empowering them to live out their God-given purpose.” Thus began her Life Restoration ministry.

Women who were considered a lost cause by society had few or no skills to earn a decent living and no recognition of their true value as a person were allowed to come to a class which used sewing as a basis for preparing them for a better future. They were to learn how to make baby items for low-income mothers in Bowie, Decatur and Keller for various pregnancy clinics. A Bible class included in the time spent in the program helped them realize such truths as Jeremiah 29:11, “I know the thoughts I have for you, says the Lord. Thoughts and plans for welfare and peace, and not for evil, to give you hope in your future outcome.”

The program became a huge success but came to an end when the women’s unit was closed.

Pam was saddened to see the program end but surprised as she was asked to begin Life Restoration’s program in the men’s unit at the prison!

The program, named The Moses Project, is to train the men to do the same work the women had done previously with the addition of making “Chemo Bags,” a tote with items to comfort those dealing with cancer treatment. Each man is screened and approved to be allowed to join the program. A guard is present at all times, and every pin, needle and scissor has to be accounted for before the men can return to their cells.

They work wholeheartedly, grateful for the opportunity to share with the outside, and for some to make amends for what got them there. When the men have learned their skill and are ready, there is a graduation with special privileges.

Pam gave us the opportunity to be involved too, knitting things the men can’t make or any other way.

Holy Moses! Who knew God could take a timid, talented woman to create miracles in the lives of inmates through the Moses Project?