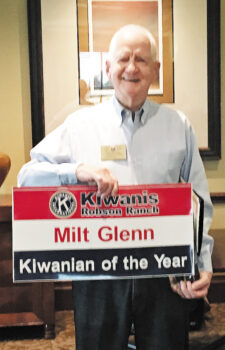 Congratulations to Milt Glenn, Robson Ranch Kiwanian of the Year! On the ballot, Milt is credited with being silent auction co-chair, ten-year anniversary chair, project events task force chair, and Source Book delivery. But, as you may recall from last month’s Pioneer Press, Milt has done so much more for the organization that works to serve children throughout the world. A member since 1997, Milt served as club president twice, board member, and on many committee projects. Milt was elected Llt. Gov. in another division.

Most of all, Milt is known for his warm welcomes, his glowing words about others, and his continuous willingness to help wherever he can.

Be sure to watch for Milt in the next Robson Ranch parade! He will have “Kiwanian of the Year, Milt Glenn” on his car.