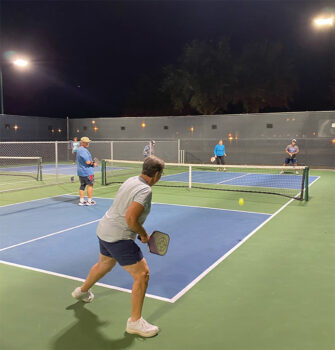 With the growing demand for lighted evening pickleball courts, the Robson Ranch Pickleball Club decided to step up and make it happen! The club was polled, and a majority of the members supported the funding for lighting eight additional pickleball courts. After three years of planning, the lighting project was completed. Robson Ranch now has 16 lighted pickleball courts. Leagues, group play, skills training, and the Pickleball Academy, now fill the courts during the evening hours. The lights are instant on LED lights that provide extremely bright lighting, and also save electricity costs in comparison to the old lighting on the original eight courts. The majority of the funding came from the Pickleball Club. Thanks to all for making this project happen!