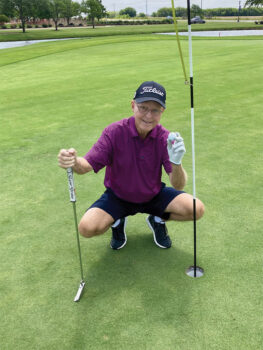 Bill Tillman showing off his hole-in-one!

The Robson Ranch Men’s Golf Association (RRMGA) held its annual two-day Member-Member event on June 5 and 6. One hundred twelve players, consisting of 56 teams, signed up to play. The basics of the event are that RRMGA members can pick their playing partner to form two-man teams. Handicaps are adjusted so no team has a differential in handicaps greater than 10 points. Players can play from whatever tee box they like for the event. Teams were then flighted into six different flights for the competition based upon their team handicaps and the tee boxes they selected to play.

The first day of the event was delayed slightly by rain. The teams started out playing alternate shots on the front 9 and then a Scramble for the back 9 holes. Par for the day was 72. Day two was Best Ball for 9 holes and a Shamble (pick the best drive and then play your own ball until holed) with both teammates’ scores counting. Par for day 2 was 108.

There was also a Closest to the Pin contest each day with Kim Crawford winning on day one with a distance of two feet from the hole. On day two, Bill Tillman was not taking any chances with someone getting closer to the pin than him, so from 128 yards out on number 4 South Bill Tillman holed out for a hole-in-one. Bill said he had been at Robson for 13 years and this was his first hole-in-one here, but third overall. Something that he is sure to long remember, as well as the bar tab that he may have run up from those celebrating with him.

At the end of the second day, six teams emerged victorious. While par for the tournament was 180, five of the six flights scored below par for the event. The winning teams and their scores to par in each flight were:

Congratulations to all the winners!

If you are interested in finding out more about the RRMGA or want to try a Play Day event to see if you would like playing with the RRMGA, please contact John McCarthy at [email protected] Guests are always welcome! We have players of all skill levels and handicaps, so come on out and join the fun. Membership applications are available at the Pro Shop and online at www.rrmga.com.