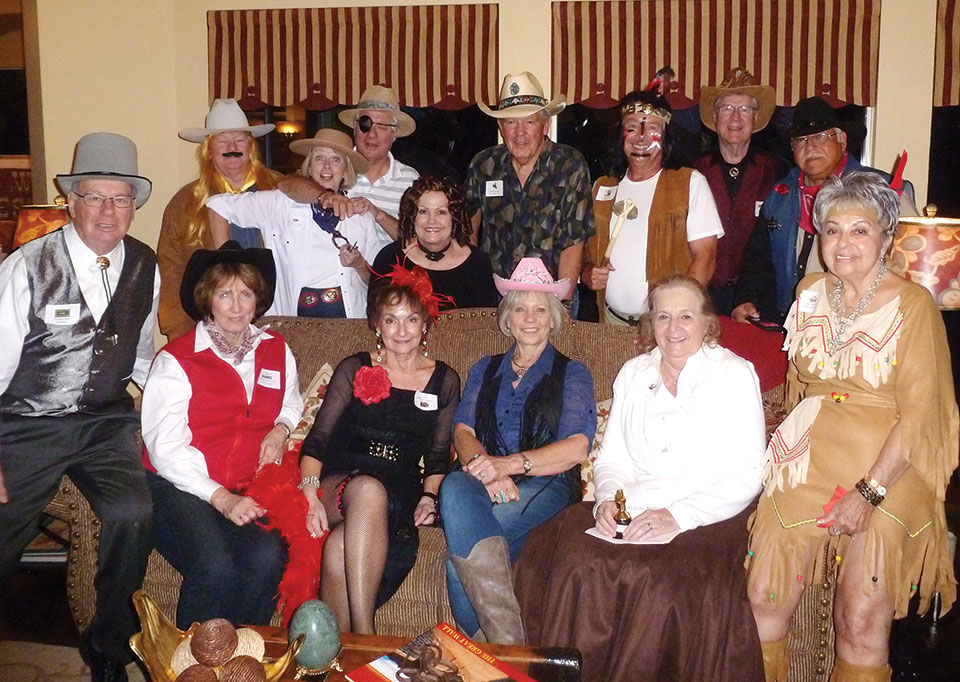 Some of Dodgy City’s respectable and not so respectable residents gathered one evening at the Last Chance Saloon to solve the mystery, “Who killed Marshall T. Pott?”

Miss Lily White had spruced up the saloon making sure her finest girls were available, and there was a plentiful supply of her choicest moonshine. The late Sheriff Pott’s best deputies were on duty to control the rabble rousers and riff-raff.

As the crowd gathered it soon became apparent who were the likely suspects in this murder: Marie McCousin, recent widow of a prominent ranch owner; Ace Lender, the town banker; Lily White, saloon owner; Lowerwatha, a cast-out Indian brave; Dot Dash, the town’s prim and proper telegraph operator; Whyat Twerp, a has-been lawman; Julie Elected, the town mayor; Juan Eye, who has lost his eye in an unfortunate roping accident – or was it? Also suspected were Little Careless, an Indian maiden take advantage of by Sheriff Potts; General Custard, who knows how he got in the mix but he did make a final stand; Scarlett O’Lahlah, a dancer at Miss Lil’s saloon (was she only a dancer?); Blaise F. Glory, the local bounty hunter; Russell Horses who had acquired quite a prize-winning herd; Johnny Lawdog, one of Sheriff T. Pott’s deputies; and Woody Box, the town’s undertaker who didn’t want to miss an opportunity for another “client.”

When the clues and questions flew back and forth among these suspects the air was filled with tension and nearly erupted in a saloon brawl with the raising of fists, tears shed by the “gentle” ladies and poems eloquently recited to the group by Lowerwatha. The scene was bordering on total chaos when it was dramatically discovered (or confessed) that Ace Lender, the respected banker, had killed Marshall T. Pott. The group disbanded before Ace was led to the gallows where he said his last words.

The suspects who were now cleared ate, drank and celebrated the rest of the evening at Consie and Ken Javor’s saloon.