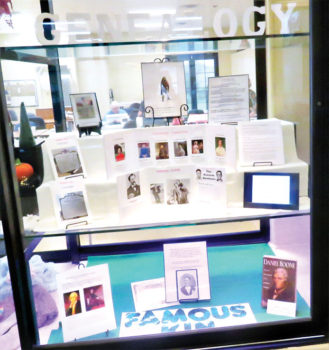 The Robson Ranch Genealogy Club display window currently highlights some of the famous and infamous kin of Robson Ranch residents. Daniel Boone is claimed by Ron Ice (seventh great grandfather) and John Weaver (seventh great uncle). Reg Rezac is a third cousin of Bob Cerv, an outfielder for several American League teams from 1950 to 1962. And even the Barrow brothers have some relatives at Robson. Club members will talk about the more interesting “characters” in their trees at the club’s next meeting, June 4, at 7:00 p.m. in Room 104 in the CATC building.