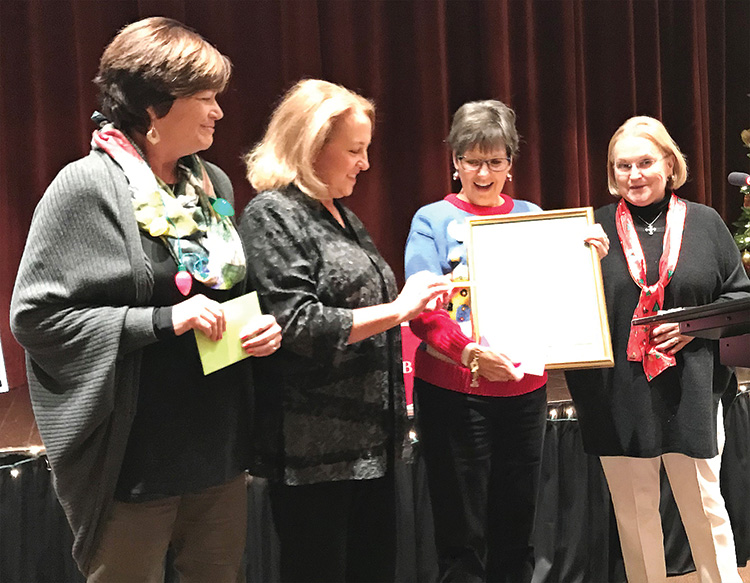 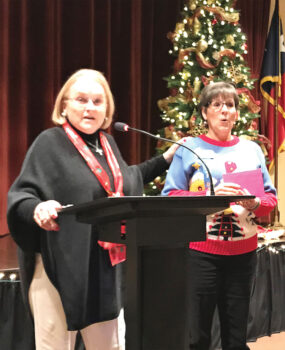 Virginia Wheeless surprises CJ Palecek with $100 for most improved player of the year.

The 60 plus ladies who attended the Wildhorse Lady Niners’ holiday party were greeted by servers with trays of mimosas as they arrived. Decked out for the season, they feasted on butternut squash bisque, sliced smoked Chateaubriand with demi glaze, au gratin potatoes, asparagus and cherry tomatoes topped off with a dessert of layers of white chocolate, raspberry, and dark chocolate mousse. Yum!

Virginia Wheeless announced the results of the ringer tournament. It started with 46 players, but only 18 completed the competition which required completion of the front and back nine five times each. The ringer tournament recognizes the most improved players for the year. Third place was Lane Adams awarded $60. Second place went to Mary Sholty for $70 and the winner was CJ Palececk for $100.

The ladies who had chip-ins and birdies each won a $55 PGA Superstore gift card and a pack of martini tees. Chip-ins were Lynn Burk, Janet Rogers, Sandy Petty, and Dee Wallace. Birdies were made by Mary Lee Garbowski and CJ Palecek.

Out-going President Janie Farnsworth recapped the year’s highlights. On behalf of the entire organization, Jane Thompson recognized Janie Farnsworth for co-founding the WLN and for serving on the board of directors for the past ten years. She was presented with a gift card and a memory box of photos from over the years.

To see the New Year in, the 2020 officers were inducted by Janie Cindric. The officers are President Jane Thompson, Vice-President Janie Farnsworth, Secretary Barb Holst, and Treasurer Deb Williams. The first board meeting will be Jan. 13 and our Meet and Greet will be Feb. 12. Happy holidays to everyone!