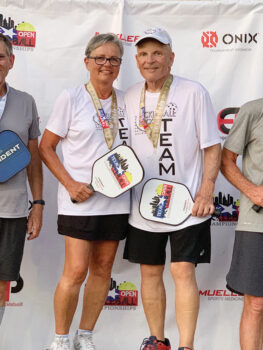 Tell us a little bit about you two?

We met in second grade, our first dance was in eighth grade, we dated in high school, and married while still in college at LSU and with pickleball at 60, our life story. Over the years, we have moved several times with stops in Louisiana, Alabama, Florida, Arkansas, and three times in Texas. We have three daughters and seven grandkids.

How did you two get started in pickleball?

We were thinking about retirement but weren’t sure what we would do with our free time. We took a vacation to Arizona, stayed at a Robson community, saw people playing pickleball, and said we found something to fill our time. We found out there was a Robson in Texas and bought a house. We still weren’t retired and lived in Arkansas working for SC Johnson. Once we bought the Robson house, we left work every week and drove six hours on Thursday to play pickleball all weekend and drove back to Arkansas on Sunday night. After about six months, we made the final move to Denton. When we moved here, we had two indoor courts and about 120 people playing pickleball; it was crazy trying to get court time.

Pickleball is a very social game and we love traveling and meeting new friends everywhere we go. The exercise is great, thinking where to go with shots helps keep one mentally sharp, but most importantly, we love seeing all the smiles and happiness it brings to people of all ages.

How many tournaments do you estimate you have played in and how many medals do you have?

We have played in over 170 tournaments in 35 states. One year, we traveled from Portland, Ore. to Portland, Maine and Palm Desert, Calif. to Naples, Fla. There weren’t many tournaments years ago; we had to travel a couple hundred miles just to play in one. Our medal count is over 500, and we just weigh the medal bowl now instead of counting and it’s over 35 lbs. The game has changed a lot over the years. When we first started playing eight years ago, there was no such thing as a soft game or strategy, you just hit the ball. There was no academy, no instructional help so it’s great to see skill clinics and academy for new players.

Any other comments on living at the Ranch or playing pickleball?

Love living at Robson as we have met so many people on the courts that may have not happened without the little plastic ball.