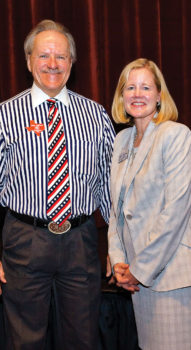 The monthly meeting of the Robson Ranch Republican Club was held February 6 in the main auditorium of the clubhouse. There was a large turnout to hear our speaker, Judge Tiffany Haertling, of the Denton County Family Drug Court. She spoke on the many success stories they have had relating to non-violent drug offenders who have chosen to go through their court, thus escaping a drug-filled environment that too often escalates into more serious crimes. She gave several examples of people who have gone through the program, graduated and are now living on their own or back with their families, employed and being assimilated into the business and cultural world.

Our County Commissioner, Dianne Edmondson, who is a Robson Ranch resident, also gave us an update on what is being done on some of the roads in our area relating to construction and a timeline for completion. Several other elected officials gave greetings and new residents of Robson Ranch from many parts of the country introduced themselves. All Robson Ranch residents are invited to our monthly meetings, held the first Wednesday evening of each month!