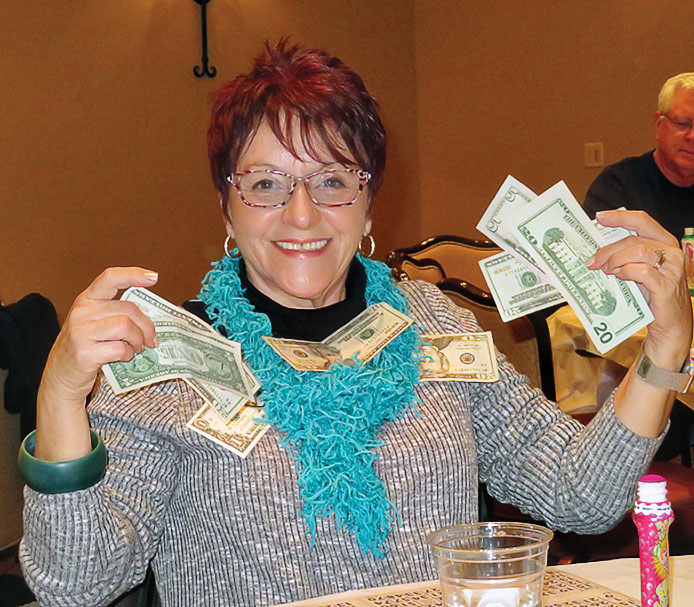 It would be a bit of a stretch to say that bingo, that staple of nursing home social calendars, post retirement cruises and charity fundraisers, is hip. But what is occurring at Robson Ranch these days is nothing short of a bingo revolution. It is not your grandmother’s bingo anymore, not around here. This is a game on the edge of cool.

Bingo Blast returned to the Ranch in February courtesy of the Kiwanis Club RR. Players got there early, needing a bit of time to get settled as we had to claim our preferred seats. Then we unloaded supplies from our bingo bags – those well-worn dabbers – fat colored magic markers used to mark our paper sheets with circular smudges covering the numbers that are barked out in rapid fire succession.

The numbered balls popped out of the mechanical blower by pure chance as players worked six or more cards at a time. As the bingo balls were bouncing out and the numbers were called, we mumbled under our breath “my bingo numbers are on fire”. As the balls continued to fly out and with still time to claim a bingo, anticipating the cash prize, we bite our nails to the quick as each number is dabbed. The bingo balls drive us crazy, but all we can say is “C’mon baby, let the next number be mine, all mine.”

Soon, there is a collective groan in the room as someone yells “BINGO” in their booming voice, giving them sheer satisfaction. Faces swiveled in their direction and the attendant materialized to peel off some bills. As the floor walkers doled out winnings a chorus bleated the usual lament of losers, “Same winners every time”. Then the next game began.

The winning cash hits our wallet with a cha-ching, its music, sweet music to our ears. Who hasn’t learned to love bingo money? And when we win, we know the Kiwanis Club wins, too.

Want to win even bigger? Come join the Kiwanis Club Robson Ranch on the first and third Fridays of each month at 8:30 a.m. in the clubhouse. For more information, contact Ed Kerr at [email protected]