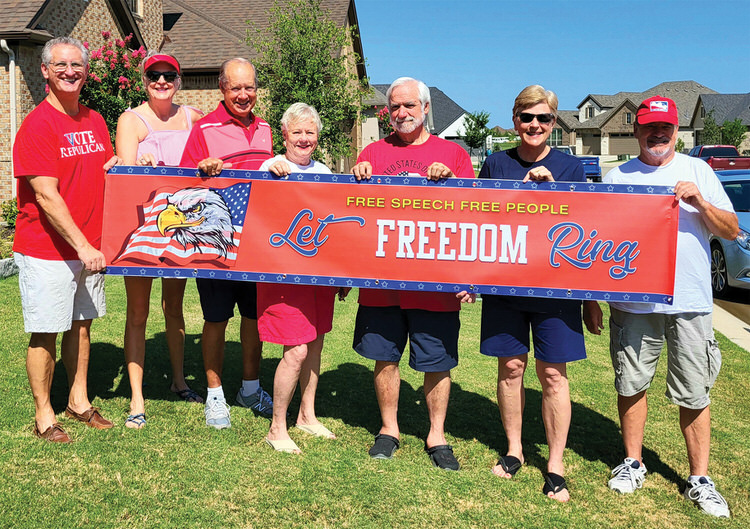 Energy, excitement, and enthusiasm! All were felt when members of the Republican Club were together making their float to enter into the Robson Ranch Independence Day parade.

The title of the float is “Let Freedom Ring!” and a large banner on each side of the float proclaimed the uniquely American sentiment that is such an integral part of what we celebrate each Independence Day. Furthering the ideals of freedom, liberty, and independence, the float has a three-foot-high image of the Liberty Bell on each side of the float. The Republican Club even had a special music mix created that has excerpts from Dr. Martin Luther King, Jr.’s famous “I Have a Dream” speech where his proclamation of “Let freedom ring!” is repeatedly played over the top of some patriotic music. The music will also pay homage to the armed forces by playing the primary song associated with each branch—including the newest branch, the Space Force!

John Romeo, the chairman of the Parade Committee, is a professional designer. Romeo put forth some initial ideas to the committee who refined the ideas and, later, the design was voted on by everyone at the next regular meeting of the Republican Club. From there, with a final design approved, Romeo completed the design and secured the materials, banners, etc., to do the actual building, and transitioned into foreman of the building crew. The crew consisted of men and women from the Republican Club, of various levels of construction skill and lots of enthusiasm, and put the float together over a couple of work sessions, completing it just days before the parade.

Over 40 members of the club were involved in making the float or participating in the parade, and many others were along the parade route watching with their grandchildren!

The float was a great success, and many members of the Republican Club got together after the parade at the Grill to celebrate their job well done.

If you are interested in joining the Republican Club, send an email to [email protected] or come to the regular meetings held the first Wednesday of each month at 6:30 p.m. in the clubhouse.