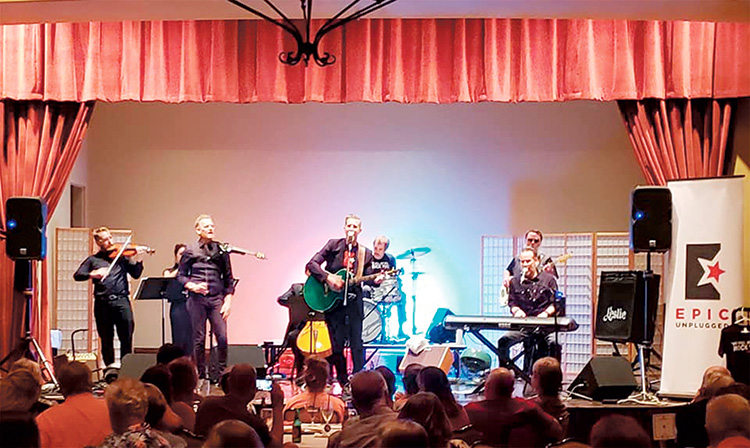 The essence of Robson Ranch is the diversity of the residents. Witness the range of organized clubs, activities, backgrounds of our neighbors, birthplaces, and interests. It is fitting, then, that we would end the first season of the Robson Ranch Classic Rock Group Summer Concert and Dinner Series with a performance by Epic Unplugged. They bill themselves as a Tribute to Epic Rock – Unplugged + Strings. John Kenny, lead guitarist and vocalist, said the idea was to create epic rock songs in an unplugged set up featuring an additional string quartet. They wanted to take these epic rock songs and perform them in a unique way, in a quieter, full band, using acoustic style instruments. Their goal was to perform the greatest rock songs from the 1960s through the 2000s and let the audience experience them in a new way, with a full band and string quartet.

And this they accomplished.

Their body of work was vast. When was the last time (if ever) you heard Led Zeppelin, Radiohead, Dido, and the Eagles by the same band in the same set? A neighbor told me he never thought he would hear “War Pigs” played at Robson! The musicianship was great, the arrangements were superb and the playlist was limitless. And we were introduced to some new tunes. While not everyone recognized or knew all of the songs, all knew many. And the crowd rocked to them! The truncated dance floor shrunk as more of us got up to use it throughout the concert.

Once again, the Whitehorse Grill did an outstanding job of preparing and serving a good dinner. The chicken parmesan was great! Thank you to Shelbi Berg and Jeremy Trietsch for a successful inaugural season of concerts. Stay tuned for information on the opening concert in March 2020. We are in the process of gathering the lineup for the 2020 Summer Concert Series.