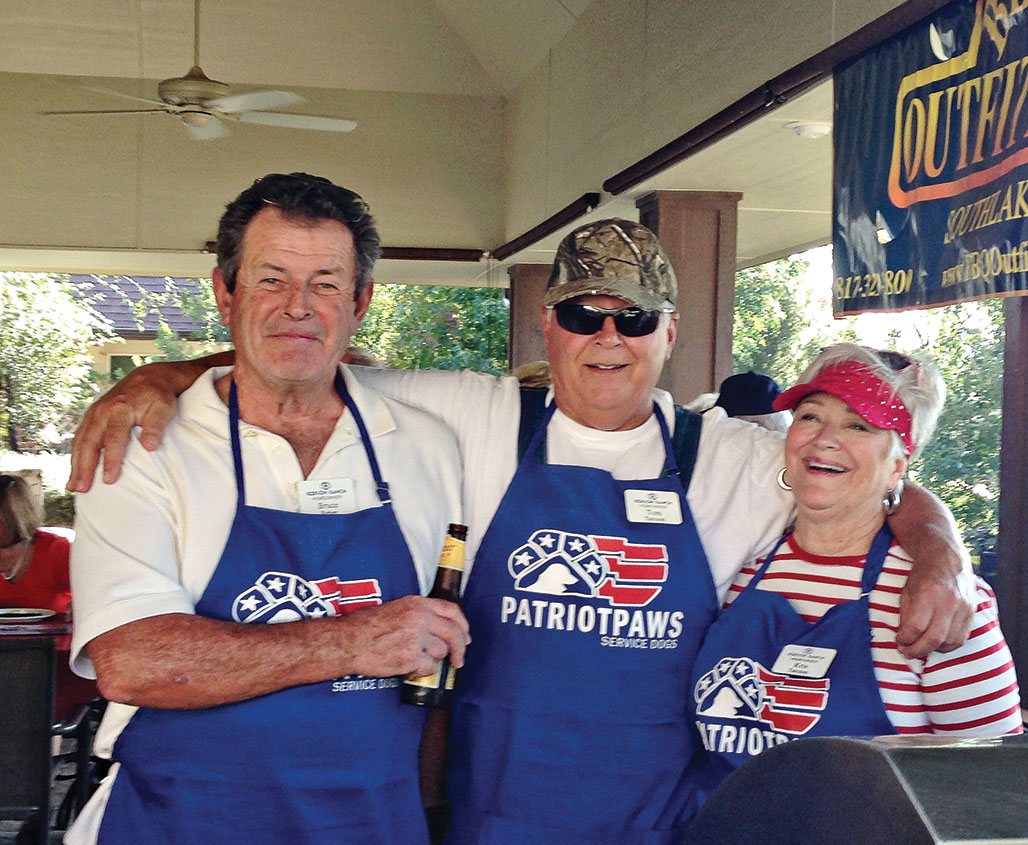 The first annual Robson Ranch Eggfest was held Saturday, October 18, 2014 at the home of Chuck and Shirley Johnson in Robson Ranch. With more than 90 people in attendance over the course of two hours, guests were able to enjoy food, fun and fellowship.

This event was inspired by Shirley Johnson of 3G Properties and a group of veterans who live in Robson Ranch. They decided to take their love of cooking on Big Green Eggs and turn it into a fundraiser that benefited Patriot PAWS Service Dogs.

Event organizers consider themselves blessed to have great sponsors for their first annual event. BBQ Outfitters of Southlake donated a Big Green Egg and Nest, Ceramic Grill Store in Denton donated gift certificates and everyone’s favorite dessert, Nothing Bundt Cakes, donated gift cards. Winners of the Big Green Egg were Bryan and Nicole Gee. Nicole’s parents, Tom and Lore Car, are residents of Robson Ranch and were both volunteers for this event. The money that was raised through dinner admission and raffle tickets totaled over $3,250. A check will be presented to Patriot PAWS.

Typically an Eggfest can be thought of as the ultimate cookout. The “Eggheads” fire up their Big Green Eggs then smoke, grill, and serve everything from brisket, chicken, pulled pork and sausage, to (you name it) that can be cooked on a Big Green Egg! An Eggfest is not a cooking competition; it’s a tasting frenzy by “Eggheads” who love to talk about how they use their Eggs.

Founded in 1974, the Big Green Egg has come to symbolize outdoor cooking. It is modeled after a traditional Asian ceramic cooking concept that has become one of the fastest growing segments of the U.S. barbecue industry. Originally constructed with clay, the Egg is now manufactured with space-age ceramics that make the cooker virtually indestructible under normal cooking circumstances. Headquartered in a suburb of Atlanta, The Big Green Egg is available in more than 20 countries worldwide.

The mission of Patriot PAWS is to train and provide service dogs of the highest quality at no cost to disabled American veterans and others with mobile disabilities in order to help restore their physical and emotional independence. Patriot PAWS intends to build partnerships with the state and community organizations to help develop and support this goal.

Event planners are looking forward to next year’s event in October 2015.