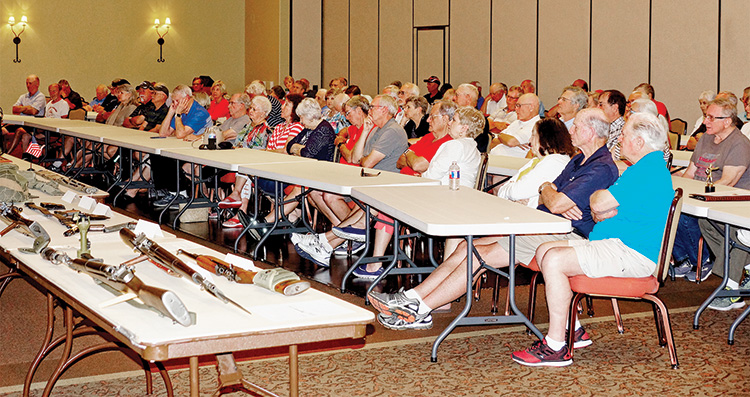 On the evening of June 5, the Robson Ranch Gun Club held a historical seminar to mark the 75th anniversary of D-Day. On the morning of June 6, 1944, after two years of preparation, allied forces unleashed an invasion of 175,000 soldiers upon the shores of Nazi-occupied Normandy, France.

To honor and remember the sacrifices these men made, we put together a group effort within our club.

We are fortunate to have within our group a military historian, Miguel Ondina, who put together a presentation about D-Day and the light infantry weapons and personal equipment used on both sides.

During his presentation, Miguel revealed several interesting facts that many may have never realized. For example, the famous General George S. Patton Jr. was absent from the battle, yet he played a significant role in its success. A phony army had been created around him to convince the enemy that he was preparing to invade at Pas-de-Calais. It worked! The German High Command believed that Normandy was a feint. This resulted in their holding heavily armored Panzer units in reserve that most assuredly would have altered the battle.

Our club members have collections of rifles, pistols and articles of that era and offered them for display. After Miguel’s presentation, these were grouped and displayed according to the nations who fielded them: American, British, Canadian and German. We couldn’t get a real tank in the room, but finely crafted models of such vehicles were displayed. At each display, we placed club members who were familiar with the items and answered questions about them as the attendees looked them over.

Although the facility included a stage and seating for 120 people, we really didn’t know what to expect in terms of attendance. As people began to come in, we were pleased when the room was half full. But we were even more delighted when it became standing room only. Our audience was wonderful and we appreciate their support and shared desire to honor these men.