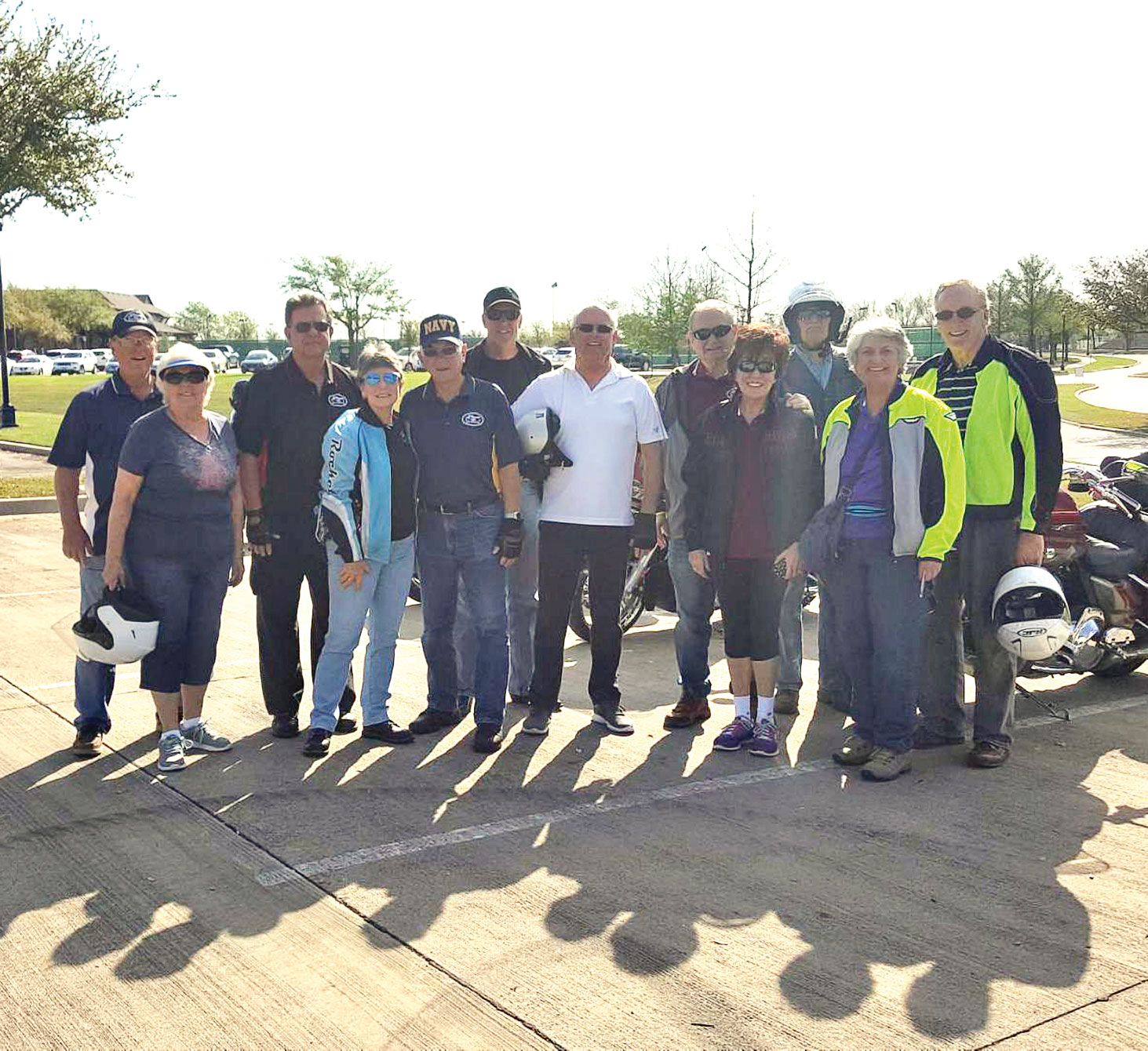 Free bike washes were offered throughout the month of April 2019, but only if you left your ride outside. At this writing, it is on track to be one of, if not the, rainiest Aprils in recent memory. But that did not deter the riding faithful.

The club had a lunch ride to PortoFino’s on April 9, located in beautiful downtown Krum, Texas. The outing combined a fun day of riding on the great roads northwest of Robson, with some delicious Italian food. Robsonites always get treated well at PortoFino’s, and the owner had a big table set up for the great turnout this day. Elaine and Edward Barnett, Steve Haugen, Mary and LT Bryant, Dee and Jim Sico, Vicky and Scott Baker, Marti and Mike Conley and Steve Williams all had fun and ate well. Thanks to Jim Sico for handling the Ride Captain duties. The club had originally planned to ride to Pelican’s Landing Marina in Gordonville, Texas, but the owners had the audacity to be closed on the day we chose.

The club board met on April 18 to discuss our current status and plan for upcoming events. We welcomed new members Ron and Mary Ann Bane, Rick and Debbie Andrews and Bob and Cherlyn Conway and look forward to riding and socializing with them.

The regular fourth Thursday night Dinner Ride for April was moved to Monday, April 29, in order to accommodate the great Support Our Troops Golf Tournament, and the plans were to go to Los Amigos Restaurant in Lake Dallas, to get an early start on our Cinco de Mayo celebrations. Vicky Baker and Jim Sico handled the Ride Captain and Sweep functions respectively. The restaurant review will appear in next month’s edition.

We are looking forward to the Arkansas stay in the Golden Era ride in May. Destinations include Hot Springs and Eureka Springs and the Mena Mountain Resort in Mena, Arkansas, home of the Ouachita Mountains.

For those interested in a golf tournament to help support a motorcycle related event, check out the Coats for Kids Ride Golf Tournament (C4KR). It will be held on May 16, 2019, at the Brook Haven Country Club, 333 Golfing Green Drive, Farmers Branch. Coats for Kids Ride is sponsoring two holes, supported by Cycle Center of Denton and Whataburger. There are two tee times: 7:30 a.m. and 1:30 p.m. Contact Stan Brein for additional information.

The club’s Quarterly Social and Club Meeting will be at the world-famous Robson Wildhorse Grill and Golf Club on May 23. Among the planning activities will be participation, for the second year, in the Robson Ranch Fourth of July Parade. The Bakers have graciously volunteered to host the decoration party prior to the parade.

Be sure to check out some of the articles posted on GroupWorks from a variety of sources covering all sorts of motorcycling related interests!