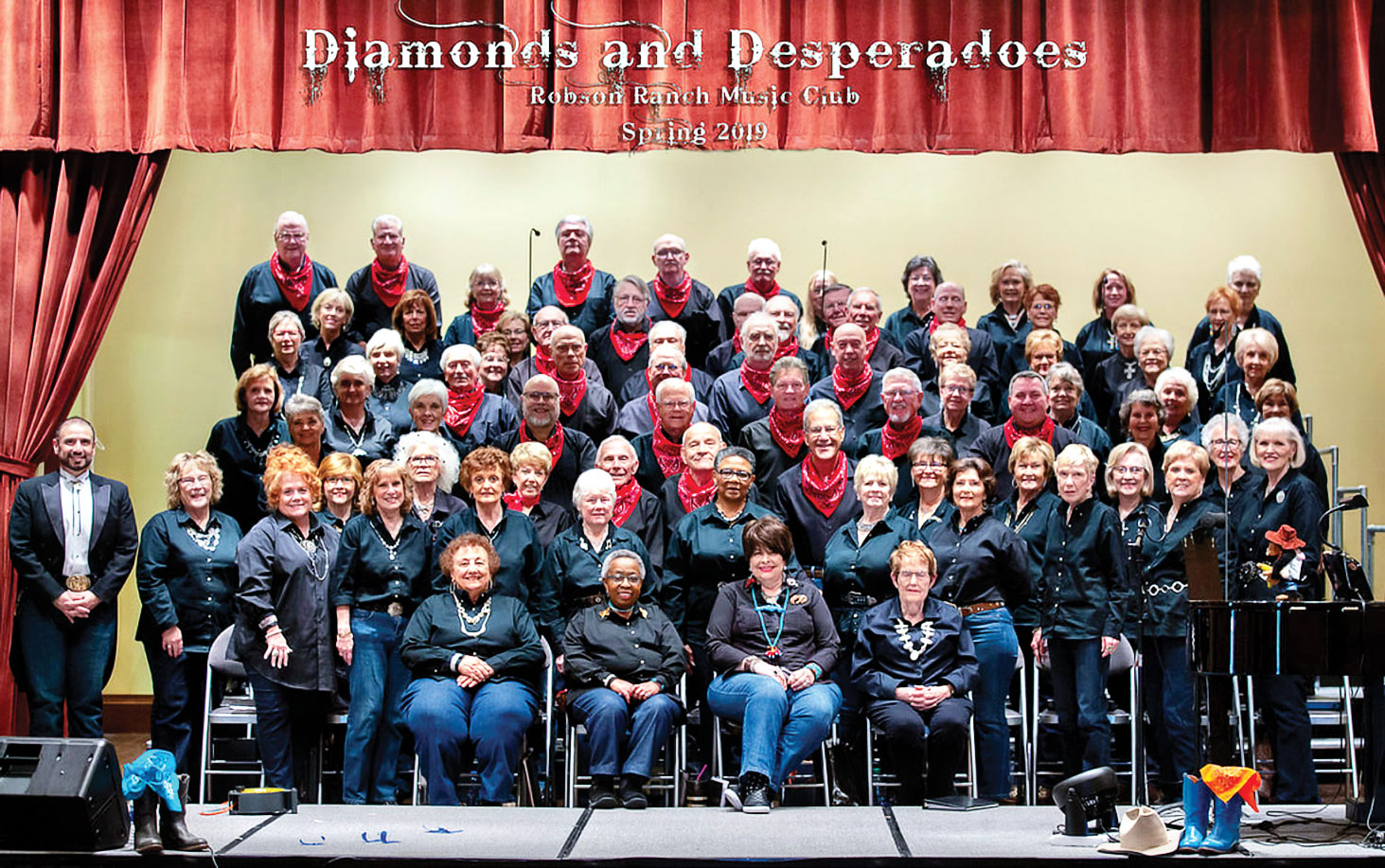 Boy howdy folks, the Robson Ranch Choir had a tremendous turn out for their spring concert, Diamonds and Desperadoes. They wish to express their gratitude to all the folks who turned out and enjoyed the country classics. A knee-slapping of a good time was had by all! Patrons were entertained by such well known tunes as Jolene, solo by Bert Zeitlin, telling her to leave her man alone. Then the ladies of the choir sang Tammy Wynette’s, Stand By Your Man cause, after all, he’s just a man. Of course, you can’t do country and leave out Patsy Cline’s Crazy, so ladies turned up their country twang and lamented about their broken heart. Dee Kurtz did Dolly Parton’s Coat of Many Colors backed by the choir, beautifully telling the story of Dolly’s coat made of rags. So, it seems the ladies were truly a little fickle indeed! Apparently, they were crazy for standing by their man even though he was smitten by Jolene, while wearing their coats of many colors! Thank goodness they decided I Will Always Love You, solo done by Debby DiPasqale, and all turned out just peachy.

The men did an enthusiastic Rocky Top as well as a heartfelt rendition of He Was a Friend of Mine, both of which warmed the cockles of your heart. Just before the intermission, Geoffrey Wright led the choir in a song made famous by Garth Brooks, Friends in Low Places. That turned into an “all skate” as they say and the walls were trembling like a chihuahua! Later Bridge Over Troubled Water which was apropos considering the rain on Saturday brought back memories of the Eagles’ hit. This led into another crowd pleaser Desperado, also done by the Eagles, which was especially well received.

Director Arturo Ortega, who, by the way, played the harmonica to open the show, rounded up a herd of musicians that were talented beyond mere words. They melded the concert together like peanut butter and jelly, making this a yummy and delightful snack of a concert.

The choir was truly touched by the jubilant response. It is very gratifying to bring such a gem of a concert to Robson for all to enjoy and appreciate. The Music Club looks forward to seeing you all at our events in the future.

Coming up: July 4th Concert, Denton Community Band, October 25 Scaryoke, November 11 Veterans Concert, December 21 and 22 Christmas Concert, December 31 New Year’s Eve. Go to our website rrmusicclub.com to keep yourself in the know. So just like the concert ended, we say, “happy trails to you until we meet again”.