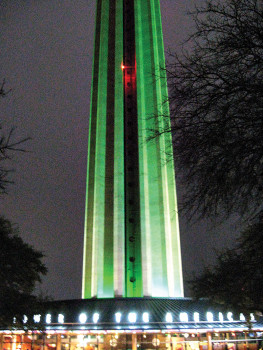 The tower in San Antonio 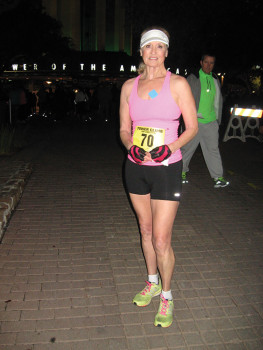 Marsha after the race

The Tower of the Americas run for Cystic Fibrosis was held on February 7, 2015 in San Antonio, TX. This was the 30th year of this fundraising event to raise money for research in finding a cure for cystic fibrosis. Participants ran one mile prior to entering the tower where they then ran up 54 stories to the finish line.

Marsha O’Loughlin participated in this run and won first place in her age group in a time 22 minutes and 10 seconds in the 60+ year old group. Marsha wore bib number 70 in recognition of her 70th birthday, which occurred three days after the race. Seventy is now the new 50.

Prior to that run, on January 31, 2015, she participated in the Big D Climb in Dallas, TX on the West Coast Label team. The race was up 58 stories at the Comerica Bank Tower building in downtown Dallas. Marsha finished the race in 14 minutes and 4 seconds. The team she was on finished in first place this year in the Elite Climber category. All of the team members, including Marsha, decided to run the building a second time for a total of 116 just for the fun of it. The Big D Climb raises money for research for the Leukemia and  Lymphoma Society.