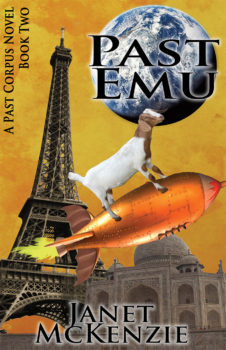 “It was a dark and stormy night.” Snoopy sits atop his dog house writing on his manual typewriter.

What makes a great beginning sentence? What makes most people want to read further? It’s the hook. It’s not always easy for the new writer to think what to write, no matter how important the first sentence is to the reader.

The following are examples of the crucial hook:

“Imagine a ruin so strange it must never have happened.” –The Poisonwood Bible, Barbara Kingsolver. The beauty of this quote is that it creates a mystery the reader wants to solve. What makes the ruin strange? Is the ruin real? What was it before?

“Howard Roark laughed. He stood naked at the edge of a cliff.” –The Fountainhead, Ayn Rand. Why did he laugh? Is he really unclothed or is naked a metaphor for something else? Is he about to jump off the edge?

“‘I hope you’re carpenter enough to build an honest coffin,’ I told Jackson, my younger brother.” —Telegraph Days, Larry McMurtry. Who died? Why don’t the boys go to an undertaker? What’s an honest coffin?

While readers may not consciously ask these questions when they read, the writer gives them something to keep reading—the hook. The above are fiction books, but non-fiction applies, too.

Several years ago, when I wrote Past Corpus, I consciously wrote, “Grabbing the hoe, Silo swung, striking the snake’s middle, cutting it in half.” The sentence sets up the first scene of this Texas novel with action and introduces the main character with an unusual name. Where is she and is she named after a grain silo?

Past Emu, second book in the series, falls short of a spiffy beginning. Should I change it? Probably, but having moved on to Past Good Earth (out next year) it won’t happen anytime soon. The beginning niggles in one of the folds of my brain.

So, moving on to Past Good Earth, “Dear Sister, Being with Mother for the first time in six years was interesting. While we enjoyed ourselves and experienced Beijing to the fullest, it took me a while to warm up to, should I call her Ping as Chu does? This just wasn’t the mother I knew growing up. She was actually giggly happy.” Hopefully several words will entice the reader to look farther. Or should I begin with: “By now you’ve probably heard about our incident with the dead body. (What is it with me that I keep experiencing dead bodies?).”

All more enticing than “It was a dark and stormy night.” Check out the book you’re reading now. Did it grab you from the beginning? Of course there’s another reason to read a book—the author. But that’s another article completely. Maybe in a few months…