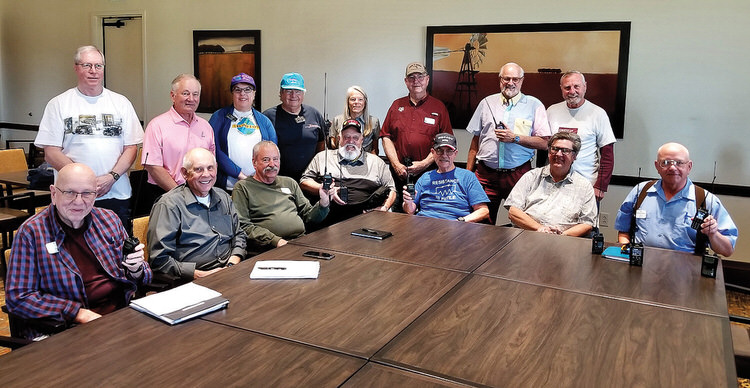 On the Ranch and on the air

We’re proud to announce the official launch of one of the newest clubs at Robson Ranch, the Amateur Radio Club!

This is a club for, and of, Amateur Radio (aka “HAM”) operators living here in Robson Ranch, and while members are likely to be FCC-licensed radio operators, that is not a requirement to join. Many of the club members are also members of nearby organizations, such as the Denton County Amateur Radio Association (DCARA) and the Amateur Radio Emergency Service (ARES).

One of the great aspects of the Amateur Radio Club, like so many of the Robson Ranch clubs, is the opportunity for newcomers to benefit and learn from those more experienced. Among the many well-established HAM enthusiasts, our club has a small handful of lifelong radio operators with a combined 225 years of experience! Rob Rumsey sets the bar for our club, having operated HAM and held a license for 60 years.

The club’s mission is to educate current and future members at all skill and license levels on the proper operating procedures, the scientific background, and the rules and regulations associated with amateur radio. We aim to do this by means of classes, mentoring, and exchange of technical information and assistance. As just one example: At this month’s meeting, Tim Battle (K5RRG) gave the club a demonstration of the WiRES-X Portable Digital Node capability of his Yaesu radio, and within 30 seconds, we were talking to another HAM operator in Massachusetts!

Our club’s stated goals are: to promote amateur radio individually or at established community functions; to further the hobby of amateur radio; to render communications as a public service during impending storms or following severe weather; and to assist in disaster relief operations by providing communications when called upon by any official agency of the city, county, state, or government of the United States of America.

The Robson Ranch Amateur Radio Club meets on the third Tuesday of each month at 1 p.m. in the clubhouse.

If you are interested in HAM radio, have or want to get a license, and would like to join the club, please contact Darrell Supak at [email protected], or Mike Moss at [email protected] Or you can request membership directly on GroupWorks (Robson Ranch Amateur Radio Club, app.groupworks.com/#/groups/4830).