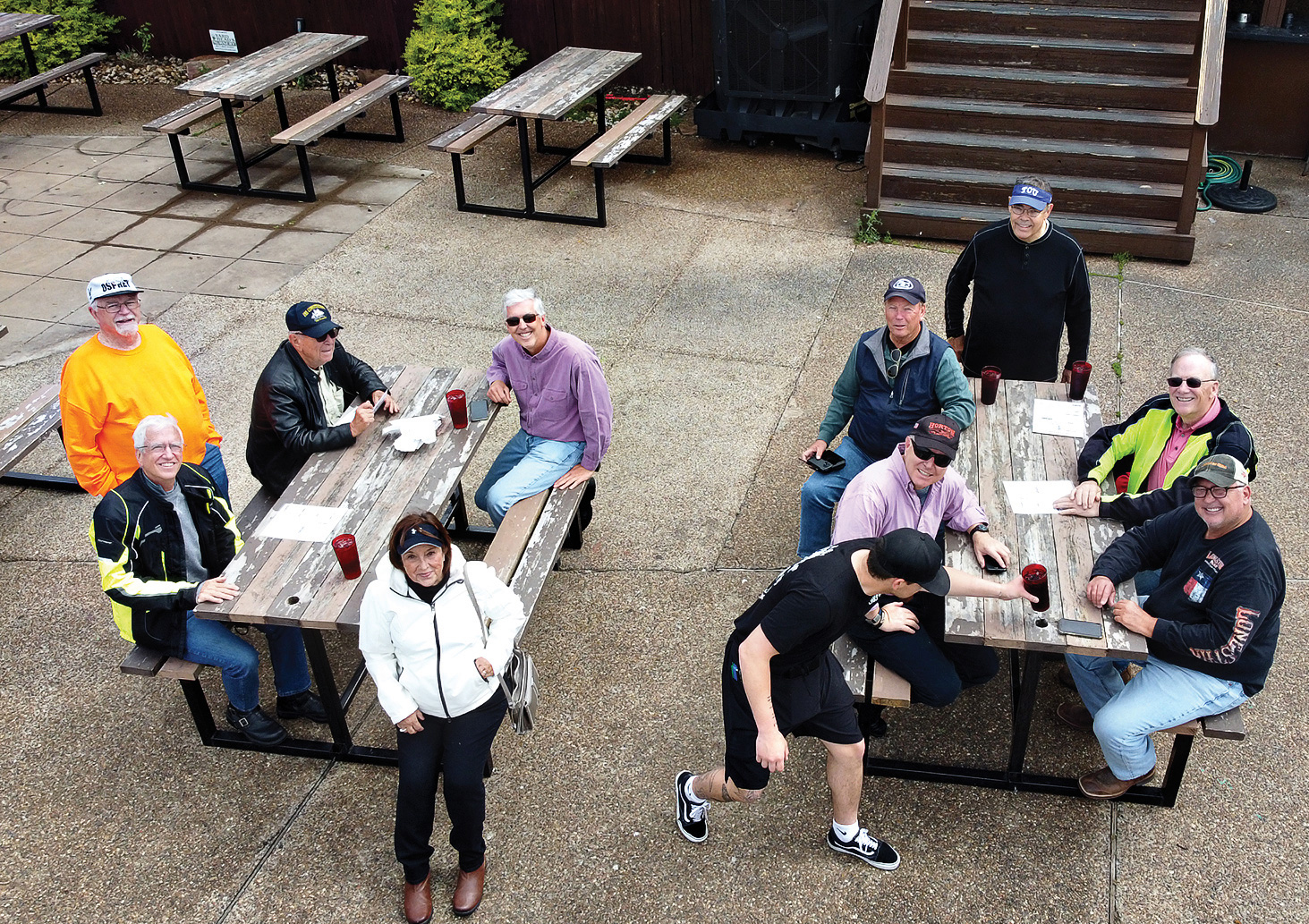 When we are besieged by continued rain, where do you ride to? The water, of course! The lunch ride to the Lakehouse in Eagle Mountain had already been postponed once and was questionable for April 30, the rescheduled day. Ron Bane was the Ride Captain and Mike Conley served as sweep.

The Lakehouse is located in the scenic Harbor One Marina in the Dosier Slough of Eagle Mountain Lake. They pride themselves on serving scratch made foods in a laid-back atmosphere. But the views—the views of the lake! The wrap around bar and corn hole and pool rounds out the experience. The menu offers everything from appetizers to salads to burgers, sandwiches, and desserts. Some evenings at 8 p.m. you can catch some live music, and Trivia Tuesdays rounds out the whole experience.

Keith Breiner, Nancy and Robert Whipple, Joe Ace, Steve Williams, Dick Spivey, Reggie Rother, and Steve Wiley ventured forth from Robson in sketchy weather. The ride out took about an hour and a half and included some slow county roads. The group was able to eat outside with a nice lake view and the food was rated as good. One take away from the ride was to be sure you mute your mike if you do not want to share your comments with the group! Some rain on the ride back provided free bike washes.

The grand experience of the month was the ride to Galveston. Ride Captain Reggie Rother put together an entertaining and relaxing itinerary for the participants. Part of the fun of long-distance riding is the route options and the great vistas to be seen along the way. The outbound trip headed southeast through Lufkin on day one, including a stop at the East Texas Burger Company in Mineola. The group continued drifting through the pines of east Texas to the coastal plains of Galveston on day two via Kountze and Winnie. The return two-day trip had a stopover in Palestine. Galveston is a scenic city. It’s wonderful to stroll on the Strand in historic downtown. Sandwiched in between was a ride to the NASA Johnson Space Center and the Kemah Boardwalk. The late lunch at Landry’s was an added bonus! What a great way to break out of quarantine! Elaine and Edward Barnett, Donna and Reggie Rother, Larry Denk, Steve Williams, Doug Henderson, Marti and Mike Conley, and Nancy and Robert Whipple were all along for the ride.

The club board is planning to again participate in the Independence Day Parade at the Ranch on July 3. Everyone likes an opportunity to show off their ride, meet and greet friends and neighbors, and celebrate the history of our great country. Later down the road is the club ride to Angel Fire, New Mexico, July 25 through 31.