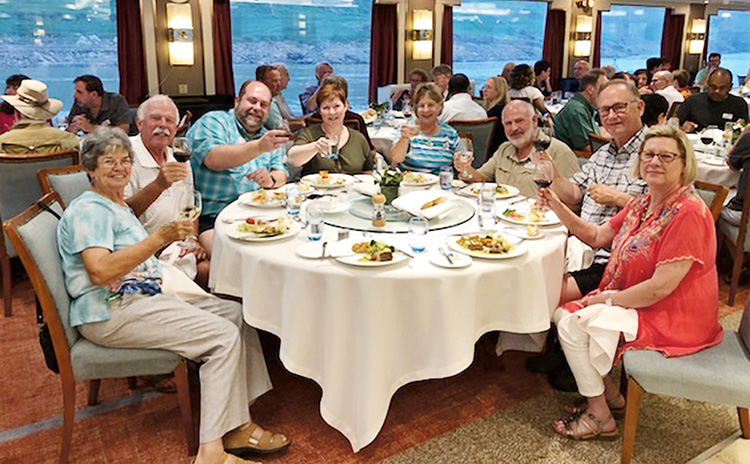 We have all been there, sitting at a round table on a cruise with friends and having four open chairs as the other guests file by and wondering who is going to sit down. Will we get along, will we have anything to talk about, will we have anything in common? Then fate intervenes and two couples walk up and sit down and you start talking and quickly realize that fate has been kind as two Robson Ranch Texas couples met two Robson SaddleBrooke Ranch couples 7569 miles away from home in Wuhan, China.

Jan and Kevin Sendker and Debby and Tom Redden were aboard the Viking Emerald about to embark on a Chinese river and land vacation of a lifetime when they met Grace and Bob Gallmann and Debbie and Craig Schreiber of Arizona’s SaddleBrooke Ranch (a Robson community) at dinner the first night on the ship. Common experiences lead to great conversation and the promise of a wonderful trip exploring the Far East.

The four couples explored the Three Gorges Dam area of China, visited Great Pandas in the zoo, stood face to face with the Terra Cotta Warriors, and walked on top of the Great Wall of China. Further trips are in the works for the eight friends and possibly the creation of the first Robson Texas-Arizona Travel Club. The trip was made even more special with the addition of new friends and was proof once again that the world is a small place after all.