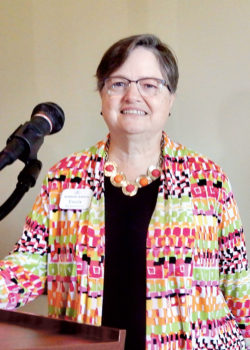 Voices United’s regular monthly meeting was held on Sept. 7, at the Clubhouse. Our group consists of progressive women who discusses cutting edge and developing issues. Tracy Olson welcomed the members and invited certain participants to share the following information:

Robson Ranch Democratic Club Meeting was held on Thursday, Sept. 26, at 7 p.m. Guest speakers scheduled to be at the meeting are: Angela Brewer, who is running for Texas House of Representatives District 64, Greg Alvord who is running for District 14 seat on the Texas Board of Education, and Susan Parker who will speak on the upcoming Denton City Board Proposal.

Two bipartisan gun safety bills passed the U.S. House of Representatives this spring. They were sent to the U.S. Senate and there has been no action. These bills are HR8 (the Bipartisan Background Checks of 2019) and HR1112 (Enhanced Background Checks Act of 2019). Time range for action alert: August to November 30, 2019.

Following the above announcements, Tracy Olson requested new members introduce themselves. They included, Emily Richardson, Robyn Schroeder, Bernadette Valkennar, Judy Ryback, Carole Johnston, and Carole Springer. Each one of them gave a short introduction about themselves such as where they moved from and the reason for moving to Robson Ranch. The new members have moved from as close as Trophy Club to as far away as California, Philadelphia, and Florida. Some of the members have been in Robson Ranch anywhere from six months to several years.

Following the presentation, there were special announcements made. Karen McDaniel’s talked about Interfaith Ministries having a wine and craft beer tasting on Sept. 14. It is to be their biggest fundraiser of the year. Margo Ways talked more about Defund Hate Talking Points, Francesca Szafranski said that she will be teaching Art History Course on French Impressionism.

Committee updates were given. For public relations, Dian Darr gave an update regarding articles being published in Pioneer Press every month. For community outreach, Patti Kelly said that the annual fundraiser event for Ignite will be held on Oct. 2, and the admission ticket price will be $25, plus donation amount of choice. There will be girls from UNT at the meeting. We will raise funds for Meals on Wheels around Christmas time. Karen Donohue from the social committee thanked all those who attended Summer Festival and said there will be a Halloween Party at Susan Engstrom’s home on Oct. 30. A representative from the caring committee said if someone belonging to Voices United is sick and needs help to get in touch with Deb Williams. Joan Wallace from the discussion group talked about a documentary called Shatter the Silence by Cheryl Allison, which is based on the “Me Too” movement and about the schedule of our future meetings. Kara Engstrom from the political action committee communicated that we are getting into political season and that she was planning an event for the Democrat Club.

Tracy Olson announced that since Voices United was having a fundraising meeting for Ignite on Oct. 2, we will not have our regular get together on the first Saturday of the month, and also since we could not get a place at the clubhouse for our meeting on Nov. 2, we will meet at a member’s home. The meeting was adjourned thereafter.

If you are a resident of Robson Ranch and are interested in joining Voices United Women’s Group, please contact Tracy Olson at [email protected]