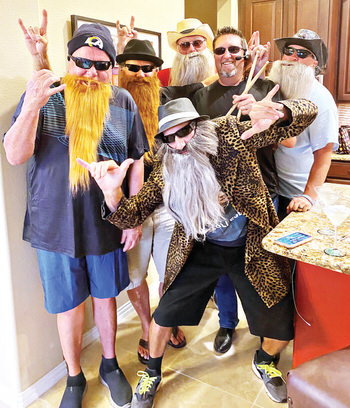 The House Band (host) for the April meeting of the Rock & Roll Martini Group was Susan and Dave Parker. The featured rock group was the Little Old Band from Texas, ZZ Top. In honor of ZZ Top, good old smoked Texas pulled pork sandwiches were served. Martinis featured for the evening included The Tush, Tube Snake Boogie, and the La Grange. There was a prize for the winning Sharp Dressed Man (or Woman). Craig DeCrescenzo walked away with the winning Sharp Dressed Man award. Cheap Sunglasses were worn by many Rockers (members) and guests. No screen doors or martini glasses were harmed in having this party. Until next month, Rock On!