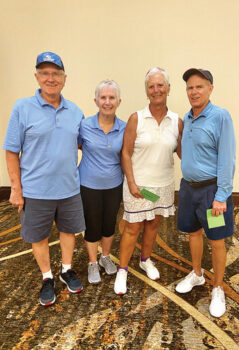 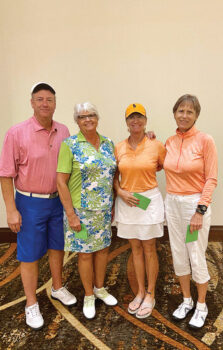 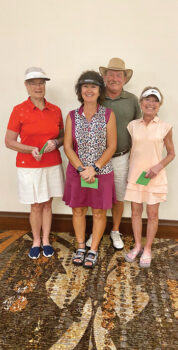 On July 6 our Mixed Invitational Event was held. There were 72 players in this event which consisted of a WGA member that chose their partner, forming 36 twosomes, which became 18 foursomes and the foursomes were paired by a blind draw.

There were three flights and prizes were awarded to 50% of the field. There were also four closest to the pin awards and they were all won by WGA members. A “Perseverance Award” of a custom designed arctic tumbler, each with a sleeve of balls, was presented to one team. Lunch was club sandwiches, chip-it chips, par-fect pasta salad, watermelon wedges, and hole-in-one shooters. Players enjoyed an Arnold Palmer drink station and could add their best shot of Tito’s if preferred.

This was an old event with a new twist! Many thanks go to the chairs of this event—Ann Brehm and Marlene Womack. Thanks for making this event successful.