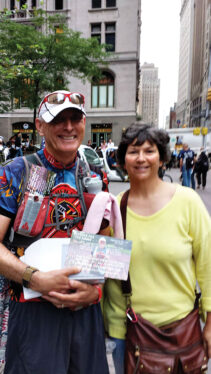 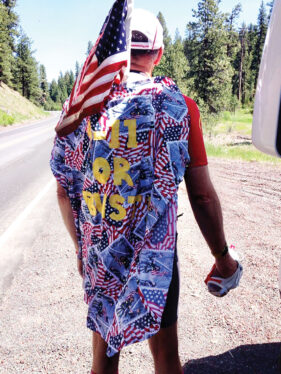 Jeff takes off on another leg of the marathon. 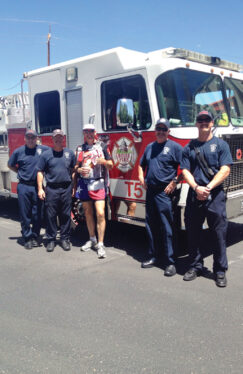 Jeff and the crew of a fire department.

Many of you are already aware of the awesome adventure Jeff and Linda Venable had over the summer when they crossed the country, coast to coast, to raise money and awareness for their non-profit. Jeff, an accomplished marathon and ultra marathon runner, ran from coast to coast, with Linda taking care of all the little details. The event has been dubbed “Running for the Hoses.” It started with a huge send off from their neighbors on Southerland, back on May 26. But let’s go a bit farther back and explain what this is all about.

After retiring in 2013 and moving to Robson Ranch, the Venables founded a 501(c)(3) non-profit, Support For Firefighters, Inc. After several of Linda’s prior co-workers lost their lives while doing their job, the Venables wanted to find a way to give back to the firefighter community. Raising money for firefighters through their non-profit made sense. There are three areas where the funds are used. The first is, support for families of fallen firefighters as there are sometimes gaps in assistance due to many different issues. The second is for safety equipment for volunteer firefighters. They volunteer! And still they have need of necessary safety gear, which they buy themselves or for which their organization holds fundraisers. Did you know that almost 75% of the firefighters in the nation are volunteers? And the third and final area is in medical research for better ways to heal burn injuries. Since there were so many avenues, what they did was make those three groups beneficiaries of their non-profit. They are called Fallen Firefighter Foundation, The Thin Red Line and Sons of the Flag, respectively.

If you wish to support them, please visit their website and make a donation. While there you will find links to the daily blog, complete with photos, and a “Mailbox of the Day!” And if you see Jeff running around the neighborhood, be sure and wave!