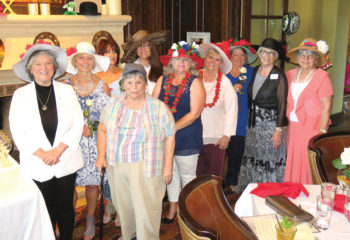 The brothers of Sigma Chi at Robson Ranch celebrated the running of the Kentucky Derby in fine fashion at the Wildhorse Grill. The event was organized by brother Chuck Newcomer who took event planning to a new level. The board room at the Grill was decorated with Sigma Chi and horse racing decorations. Brother Chuck coordinated an appetizer spread of cheeses and chips and a drink selection of mimosas and of course, mint juleps! The event featured the Sweethearts of Sigma Chi who wore their finest Derby hats. Sweetheart Lori Humphries was voted as having the finest Derby hat and received the winning prize. Brother Mick Fox organized the betting on the race. It was unique in that brother Mick actually went to an Oklahoma casino and purchased tickets for the race for the whole group. Everyone chipped in and then drew out of a hat the horses for the big race. Brother Ken Javor appeared to be the winner until a late disqualification led the way for Sweetheart Susan Parker to win the big pot. Ann Fox came through with a win in the live racing portion. A special guest of honor was brother “D”wight and Lolly Evans who came back for the special event. The highlight (or off key) event of the night was the singing of The Sweetheart of Sigma Chi to all the sweethearts that attended. It was truly a great event for all attending.