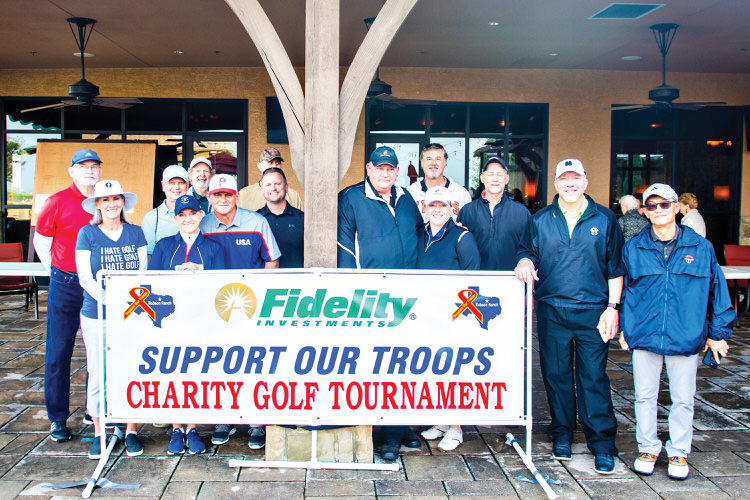 Coming up on Friday, April 29, is the 14th Annual Fidelity Investments SOT Golf Tournament and fundraiser. Although we will not be housing troops in our homes due to COVID-19, Robson residents with military family members on active duty or active reserve are welcome to invite them to play. Their tournament participation will be covered by Robson Ranch. The cost for other golfers will be $100 for annual golf members and $130 for non-annual members. This covers your golf, as well as breakfast on Friday morning and lunch on the Grill patio at the awards ceremony. This tournament is always very popular and sold out last year. There will be a maximum of 144 players playing a scramble on the South and West Courses. You can get your sign-up forms at the Pro Shop. Hope to see you on the course in April for what should be a really great day!

In other news, our packing teams sent 25 boxes of goodies to deployed troops. We now support military who are serving in Germany, Egypt, the UK, Korea, and the waters off Greece. These troops so appreciate our shipments and share them with their fellow service members. We also send out cards from our own Sassy Stampers, with personal notes from SOT members. Those deployed get a card every month, and non-deployed receive one every quarter.

The Argyle Young Men’s Service League (YMSL) meets with SOT members monthly at our clubhouse. These are young men and their moms who come to learn about our military veterans, to write cards to the troops, and to listen to veterans share their in-service experiences. YMSL is also finishing their Ultimate Package of veteran interviews. They have also helped SOT with some of our service projects and are an incredible group of young men and their moms.

The Veterans Park Brick Drive is ongoing, and if you wish to order a brick, contact Darin Burk at 309-530-1124, or get a form online at www.supportourtroopstexas.com. SOT also places the American flags along Ed Robson Boulevard on national holidays.

Finally, at our February meeting we honored Sam Goodrich, who is leaving the Ranch with his wife to become a fulltime RVer. Sam was instrumental in the formation of SOT and has served in many capacities over the years, including SOT President, 1st Vice President, Golf Tournament Chairman, and SOT Webmaster. He was given an SOT challenge coin and a warm round of applause from a really grateful organization. Best of luck to Sam and Kathie! We also needed to elect a new 1st vice president, and Scott Cooksey has taken over the office.

SOT meets in the clubhouse the second Monday of each month at 1 p.m. All of our fundraising goes to support the military who are related to folks at Robson Ranch. We also support several other charities, including Patriot Paws, that have objectives similar to SOT. You do not have to have served in the military to join SOT. All folks from the Ranch are welcome. We would love to see you at one of our meetings and have you become a part of this wonderful and important organization.