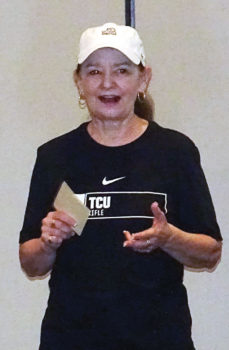 Karen Monez, the highly successful coach of the TCU Women’s Rifle Team, spoke to the Robson Ranch Gun Club at their July 10, 2018 meeting. Coach Monez is a highly decorated shooter in many different disciplines and was named by Shooting Sports magazine as one of the top 50 shooters of the 20th Century. She has been coaching at TCU since 2004 and has taken the team to NCAA national championships 12 times, earning five top five finishes and two national championships. The competitors compete in two disciplines, air rifles at 33 ft, standing position and smallbore at 50 ft, three-positions: standing, kneeling and prone. One of her shooters has registered two of only six perfect scores recorded in air rifle! She has had 17 All-Americans and prides herself in that the team boasts in the top three each quarter in team grade point averages. TCU has a state of the art range, with electronic scoring and presentation of the scores on monitors for the shooter and for the spectators! Coach Monez is an Army veteran, who shot on the Army international rifle team and also for the Army Reserve rifle teams and personally holds over 40 individual golds.

The Gun Club will not meet in August, due to extensive travel schedules. Our next meeting will be Patriots’ Day, September 11, and the speaker will be Robson Ranch resident Mike Connolley, a retired FBI agent, who will talk about his experiences as a street agent and discuss some of the firearm history of the Bureau. Contact Dick Remski at 940-262-0194 or Larry Hampton at 972-342-5000 for more information on the club.