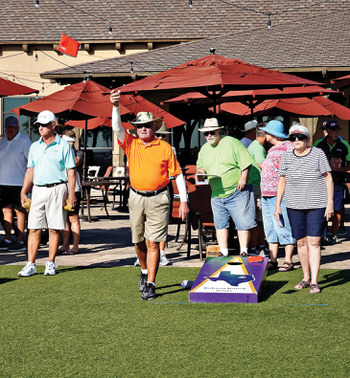 The quest to be the champion of Super Bag Bowl VIIII began in September. Thirty teams and over 300 tossers took to the patio of the Wildhorse Grill. Steve Targonski, World Wide commissioner of Texas Toss, compiled the standings as of week two. In the 4 p.m. Texas Bag League, the early leader is Corn with the Wind, Captain Anne Jones. The leader in the 5:15 p.m. National Bag League is 8 Bags to the Wind, Captain Doug Akins. The leader in the 6:30 p.m. American Bag League is Team Leprecorn, Captain Dennis Thomas. The weather has been great and Jeremy and the Grill had cold beer and margaritas on the patio. If you would like to join in the fun, contact any team to see if they have room to add players. If you would like to be placed on the sub list or if you have a team and would be willing to be the captain and wanted to be placed on the team wait list, contact Cindy Sterling, president of World-Wide Player Personnel at [email protected]