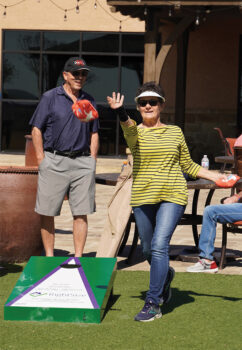 Robson Ranch Texas Toss continues even though the weather is not cooperating. After two straight Friday rain outs, players are excited to resume tossing. The first two Fridays of Toss provided a high bar for weather that everyone enjoyed. Over 300 players on 30 teams showed up for the first two nights. Steve Targonski, World Wide Commissioner of Texas Toss, tallied up the wins and points. Leaders in the Texas Bag League were Corn with the Wind, Captain Anne Jones; the American Bag League were Cool Screens Texas Slingers, Captain Cindy Sterling; and the National Bag League Team Leprecorn, Dennis Thomas, Captain. Jeremy and his crew rolled out a taco special and served up an ample supply of adult beverages. If you would like to join a team, check with any of the 30 captains to see if they have an opening. If you would like to join the sub list or team wait list (where you are the captain and you have players ready), contact Cindy Sterling, President Worldwide Player Personnel, at [email protected] Everyone is welcome on the Wildhorse patio on Fridays from 4 to 7 p.m., to cheer on your favorite teams.