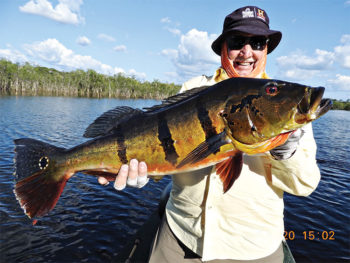 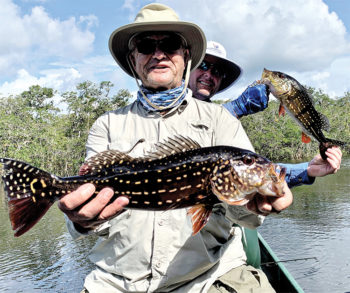 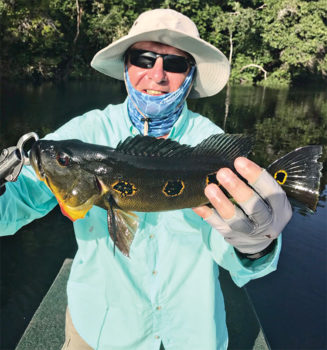 The Amazon rainforest is a fisherman’s paradise. Over 2,000 different species of fish inhabit these waters. This is more than double the number of species found in all of the Atlantic Ocean. Can you imagine casting lures or flies into these remote waters searching for that prized peacock bass or going after the legendary piranha?

In January, eight anglers from Robson Ranch (Randy and Megan Shoff, Ron and John Lehrer, Carl Caruso, George Derby, Dan Murphy, and Brian Stanton) left Texas’ wintery weather to fish the Amazon River which had been on their bucket lists ever since watching episodes of Jacques Cousteau on TV.

Arrangements were made with the outfitter to fly from Dallas to Miami, then onto Manaus, Brazil. They then traveled by seaplane over nothing but jungle until reaching the base camp located on the Rio Negro. Fishing guides were waiting in boats, and after loading their luggage onboard, headed down river to their floating cabins. Unfortunately, the cabins couldn’t move up and down the river as planned due to unusually heavy rains throughout the preceding December.

For the next four days, they spent the day on the water fishing. The Rio Negro is home to some of the most prized game fish in the Amazon. They fished primarily for peacock bass, the largest weighing in at 17 lbs. And of course, there was the notorious piranha which they feasted on for dinner.

During their stay, the group was treated to expert guide service, along with meals served daily. The variety of foods prepared was surprising considering they were in the middle of nowhere. As far as nightlife on the Amazon? Well, they were just too tuckered out by the end of the day and headed straight to bed.

In addition to the thrill of fishing each day, guides led the group into the rainforest in search of wildlife where they spotted an abundance of toucans, parrots, and macaws.

The trip to the Amazon was an amazing experience, filled with lots of sun, lots of fish, and lots of wildlife. The guides and camp staff were exceptional throughout their stay, as were all the fishermen. They came back home knowing that whether they were professional anglers or just amateurs, that when casting a line into the Amazon River, they were sure to hook fish, friends, and an adventure of a lifetime.