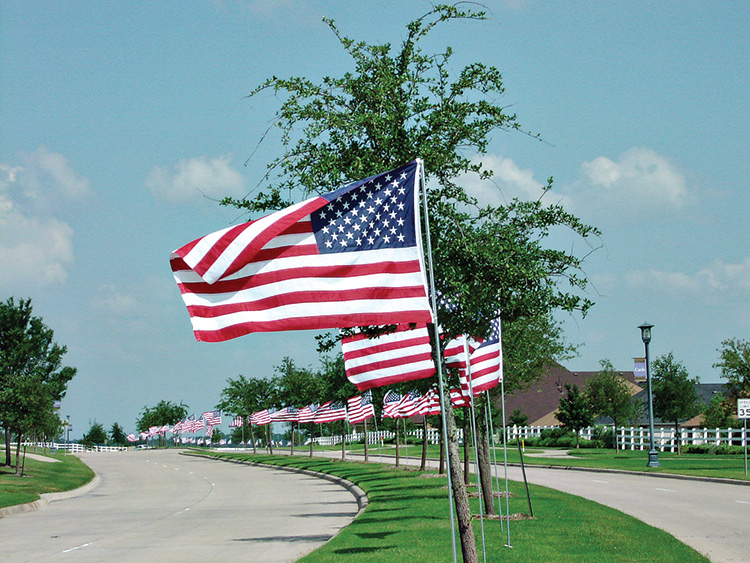 I am 18 years old, wearing rain-soaked clothes for seven straight days, suffering from jungle rot and hunger and fatigue, fighting off ticks and leeches in a country I never knew, trying not to get killed. I am a Marine in Vietnam, and I am in constant fear. Can you imagine the feelings of relief, peace, and safety I experience when I see the American Flag flying at a location? Far from west Texas and New Mexico, it is a moment of happiness and longing.

I am older now, living at Robson among many veterans. I marvel at the numerous American flags that residents fly, and I stand in prideful awe at the massive display along the main street on certain holidays. However, as I travel around and see our flags, I wonder if we really know flag etiquette or the history of the flag. I have seen flags touching the ground when being folded or rolled up. I have seen flags lying on garage floors. Joining the VFW (Veterans of Foreign Wars) was an eye-opener for me on both etiquette and history. With Flag Day approaching and the Fourth of July on the horizon, I would like to share some of my pride in the American flag.

On June 14, 1777, the Continental Congress passed an act establishing an official flag for the new nation. The resolution stated, “that the flag of the United States be thirteen stripes, alternate red and white, that the union be thirteen stars, white in a blue field, representing a new constellation.” The colors are symbolic as well. Red represents hardiness and valor, white represents purity and innocence, and blue represents vigilance, perseverance, and justice.

The flag can be flown every day of the year. If it is flown for 24 hours, it should be illuminated so the flag is not in complete darkness. It should never be allowed to touch the ground. When the flag is flown with flags or pennants of states, cities, or societies, it should always be at the peak. It should be hoisted first and lowered last.

The current U.S. flag with 50 stars and 13 stripes was designed in 1958 by 17-year-old high school student Robert G. Heft of Lancaster, Ohio. President Dwight D. Eisenhower chose his design out of 1,500 entries. The new design was necessitated by the addition of Alaska and Hawaii.