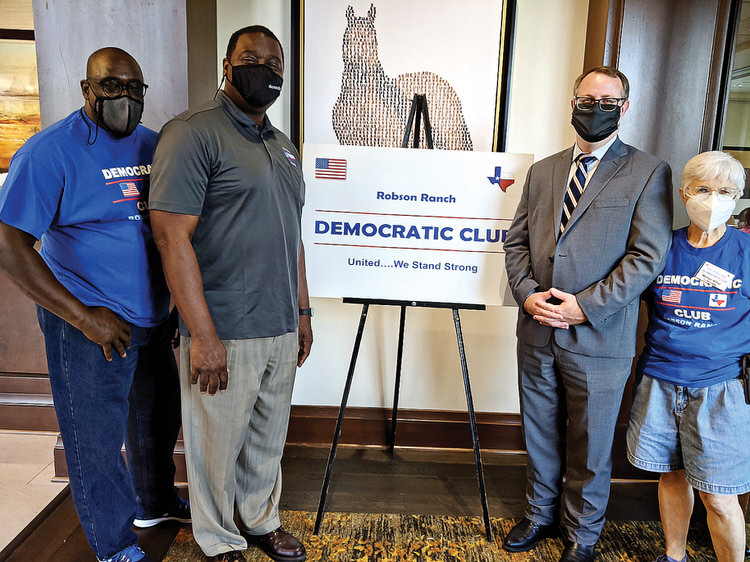 These days it’s hard to go two minutes without hearing news scrutinizing every facet of our federal government. With the overwhelming majority of media attention focused at the national level, local government is too often overlooked. Yet, in fact, the decisions, policies, and ordinances that matter most to the day-to-day affairs of our lives are happening right around the corner—right at Denton City Hall.

For the City of Denton, the movers and shakers at the grassroots level are our elected officials and supporting departments, boards, and commissions. Needing to dig deeper into the nitty-gritty of our city, the RR Democratic Club hosted Mayor Gerard Hudspeth and Councilman and Mayor Pro Tem Jesse Davis at its August monthly meeting.

Addressing the packed room, Hudspeth and Davis discussed a wide range of subjects affecting every aspect of our community:

Federal funding of $23M for Covid-19 response and testing and resources for homelessness.

Street construction back on target after hiring new contractors.

Resources allocated for homelessness for an emergency shelter, transitional housing, and return to work initiatives.

Afterwards, the meeting was opened up for a question-and-answer session on additional topics of concern to the Democratic Club members. Interviews are ongoing to fill vacancies of the City Attorney and City Manager. For those serviced by Denton Municipal Electric, there will be no rate increase related to debt incurred secondary to the February 2020 energy crisis. Redistricting will be undertaken once census data becomes available. Referable to the eviction moratorium, the city has partnered with local motels and Denton County to provide temporary housing, rental assistance, and eviction prevention using federal funding. Aggressive negotiations were undertaken with Cole and Hunter Ranch developments with protection of the knolls, prohibition of clear cutting of trees, designation of green spaces, and construction of walking and bike trails.

The topic generating the liveliest discussion centered around the city’s recent mask mandate of which both Hudspeth and Davis opposed. (Of note, there was no allocation of city resources for enforcement). Pros and cons of mask mandates were passionately debated.

The evening ended with expressed appreciations to our Mayor and Mayor Pro Tem/Councilman. No longer were our representatives distant or opaque figures. Instead, they were concrete and personable individuals tackling the many challenges facing our diverse and rapidly growing city.

This is our city and its future is in our hands. We must pay attention to what’s happening within it. You, too, can become better informed on the issues affecting our community at the local, state, and national level. Come join the RR Democratic Club on the fourth Thursday of each month at 7 p.m. in the Clubhouse. For more information, contact [email protected]